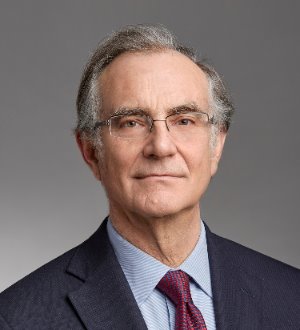 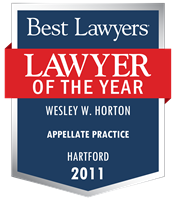 Appeals and Litigation Consultation
Attorney Horton’s appellate practice covers a wide variety of legal issues, from constitutional matters, to domestic relations, insurance, personal injury, and land use. He began his law career as the law clerk to Justice Charles House of the Connecticut Supreme Court (1970 to 1971). Building on that experience, he has become one of the premier appellate lawyers in the state of Connecticut. The list of cases on which he appears as counsel, either at argument or on the brief, spans 32 years and numbers in the hundreds. He has argued over 120 cases to the Connecticut Supreme Court; he argued and prevailed in the notable condemnation case, Kelo v. New London, 543 U.S. 469 (2005), before the U.S. Supreme Court.

Attorney Horton has participated in some of the most notable cases in the state, representing individuals and corporations. Attorney Horton handled the breakout school finance case, Horton v. Meskill, 172 Conn. 615 (1977), and continues to work for the betterment of the Connecticut school systems through Sheff v. O’Neill, 238 Conn. 1 (1996). He also successfully sustained the validity of a pre-nuptial agreement in a multi-million dollar divorce in Friezo v. Friezo, 281 Conn. 166 (2007). Attorney Horton won the reversal of a $32 million verdict in Glazer v. Dress Barn, 274 Conn. 33 (2005) and of a $3.5 million in Archambault v. Soneco/Northeastern, Inc., 287 Conn. 20 (2008).

Attorney Horton consults with counsel at the trial level to assist with complicated legal matters or in preparation for possible appellate issues. Such cases include representation of insurers and plaintiffs, contract questions, coverage issues and divorce litigation involving multi-million dollar estates.

Attorney Horton represents lawyers on ethical matters. He also testifies as an expert witness in Connecticut trial courts on ethical and malpractice matters as well as with regard to attorney’s fees. Attorney Horton served as the Chair of the Connecticut Bar Association’s Professional Ethics Committee from 1997 through 2007 and has been a member of the Committee since 1976.

Attorney Horton’s interest in the law extends beyond the practice of law. Attorney Horton has co-authored the Connecticut Appellate Rules Annotated annually since 1977. He also co-authors the Connecticut Superior Court Civil Rules Annotated annually. He has been co-author of that annotation in its various editions since 1978. He has authored or co-authored the “Connecticut Appellate Review,” an annual review of Connecticut Supreme and Appellate Court cases since 1980. Currently, he co-authors the Review with Attorney Kenneth Bartschi, a member of the firm.

In addition, Attorney Horton has taught Appellate Advocacy at the University of Connecticut School of Law every year or every other year since 1980. He taught a course at Trinity College on school desegregation law in the Spring of 1994 and 1995. He frequently lectures on constitutional, appellate and ethics issues.