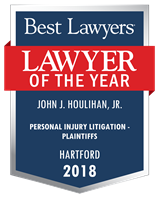 From the onset of a legal career that has spanned three decades and yielded millions of dollars in verdicts and settlements for injured people, John J. Houlihan, Jr. has always taken a personal interest in the concerns of his clients. Long after his cases are resolved, he often remains involved in the lives of his clients, considering it the highest honor that he receives a significant percentage of referrals both from former clients and other attorneys.

Mr. Houlihan has obtained numerous million-dollar verdicts and settlements, including an $8.1 million verdict in a malpractice case, in what was the largest wrongful death verdict in Hartford County, as well as more than a $3 million settlement reached during the trial for a medical malpractice case involving a Hartford area hospital. His many verdicts come from representing individuals and families involved in automobile accidents, motorcycle accidents, medical malpractice and defective products cases.

Distinguished by his work ethic, attention to detail, and intellectual curiosity, Mr. Houlihan is tenacious in pursuing the factual details, expert witness testimony, and legal precedents necessary to construct sound cases with the goal of maximizing the prospects for a favorable settlement or verdict. He has handled cases throughout the state and beyond, securing favorable results in complicated personal injury cases of all types.

He began at RisCassi & Davis as a summer intern in 1979 and knew immediately that he wanted to build his legal career at the firm. In 1994, he was appointed Managing Partner, overseeing the daily administration and guidance of the firm along with his considerable caseload.

Mr. Houlihan is certified as a Civil Trial Advocate by the National Board of Trial Advocacy and is a member of the Connecticut Academy of Certified Trial Lawyers. He is listed in the field of Personal Injury Litigation in the Best Lawyers in America, 2007, and has been designated for inclusion in the publication New England Super Lawyers2005-2009 Magazine.

An adjunct faculty member of the University of Connecticut School of Law, Mr. Houlihan taught in the Moot Court Program from 1990-1992 and has taught Trial Practice since 1988.

In 2006, Mr. Houlihan was admitted into the American College of Trial Lawyers, an invitation-only honor reserved for fewer than 1 percent of the total lawyer population of any state or province.

Mr. Houlihan resides with his family in West Hartford, where he is active in the town’s youth sports program and in Providence College alumni programs and activities.