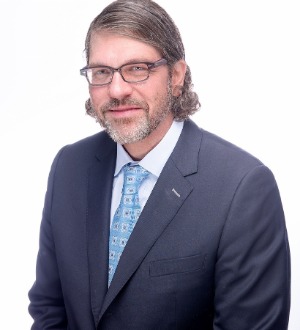 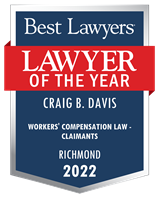 Craig is a graduate of Washington and Lee University and the University of Richmond School of Law. He has been practicing law since 1994, and limits his representation to the victims of injuries in workers’ compensation and personal injury cases.

Craig has tried to verdict and settled numerous personal injury and workers’ compensation cases resulting in awards exceeding a million dollars for his clients. According to Virginia Lawyer’s Weekly, a settlement Craig obtained for a client in 2012 was more than twice the largest workers’ compensation settlement previously reported in Virginia. Craig was recognized as a member of Virginia’s “Legal Elite” by Virginia Business Magazine and has been selected as a Virginia “Super Lawyer” for the last eight years, including recognition as one of the Top 100 Lawyers in Virginia and Top 50 Lawyers in Richmond in 2014, 2016, 2017 and 2018. He has also been selected for inclusion by his peers in the publication “Best Lawyers in America” since 2013, and is one of the few attorneys recognized in two categories: workers' compensation and personal injury.

Craig is a member of the Virginia and West Virginia Bars and has been admitted to practice before all state and federal courts in those states. Craig currently serves as a Vice President of the Virginia Trial Lawyers Association (VTLA), an association of over 2,000 attorneys committed to fighting for the rights of the injured and improving the fairness of our justice system. Craig previously served as VTLA Treasurer, Parliamentarian, and Chair of the Fundraising and Membership Committees and the Workers’ Compensation and Young Trial Lawyer Sections. Craig established the annual Workers’ Compensation Section’s Advanced Practice CLE Retreat and served as moderator for the first three years. Craig is also a member of the Lewis F. Powell, Jr. American Inn of Court and the Virginia Workers’ Compensation American Inn of Court. Craig serves as Secretary and board member of Commonwealth Community Trust, a non-profit organization that administers financial trusts for individuals with disabilities.

In his spare time, Craig enjoys coaching youth baseball for Richmond Little League and his son’s travel baseball team and other youth sports at the Tuckahoe YMCA. He is involved in several charities, including Connor’s Heroes, and organizes annual benefit concerts to support these causes. He, his wife, Lucy, and his sons, Jackson and Wiley, can often be found together hiking, playing sports, or listening to live music.

An 18-year old construction worker was struck in the head by a heavy piece of equipment while on the job. He suffered a severe traumatic brain injury. Efforts to return the plaintiff to some form of gainful employment failed and he was eventually placed in a residential brain injury rehabilitation facility. The employer’s workers’ compensation carrier agreed to plaintiff’s entry of permanent and total disability benefits. At mediation, the disability benefits and non-Medicare covered treatments were settled for a cash payment of $6 Million. He received a Medicare Set-Aside (MSA) of $234,989. A special needs trust was set up to administer the proceeds and the MSA. The payout is more than two times the largest reported workers’ compensation settlement in Virginia.