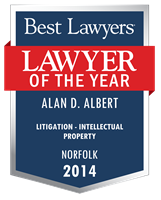 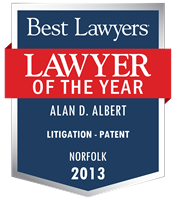 Alan Albert is a nationally-honored trial lawyer who has represented clients from Muhammad Ali to multinational corporations in a broad array of commercial disputes, white-collar criminal investigations and prosecutions, intellectual property litigation and other governmental and regulatory matters.

Mr. Albert has been recognized in The Best Lawyers in America continuously for the past 20 years, and is one of a small number of lawyers in the country to be recognized by Best Lawyers in six distinct categories – in particular, business litigation, white-collar criminal defense, intellectual property litigation, patent and trademark litigation, trademark law, and governmental relations. He was named by Best Lawyers as its Patent Litigator of the Year for 2013, and its Intellectual Property Litigator of the Year for 2014, in the Hampton Roads region. He has also been recognized in many other compilations of leading legal practitioners, including Super Lawyers and Virginia Business magazine’s annual compilation of the “Virginia Legal Elite.”

Mr. Albert is a frequent lecturer and commentator on legal and governmental topics including civil and criminal procedure, evidence, environmental law and land use, election and campaign finance law, and public finance. His writings on law, government and public policy have appeared in journals including the Harvard Law Review, the Harvard International Law Journal, and the Harvard Political Review, as well as in newspapers and news magazines in the United States and the United Kingdom. He has co-authored books on environmental law, land use, and public finance, including the Virginia Environmental Law Handbook.

In the public and civic sphere, Mr. Albert has served as a top policy and legal adviser to a Virginia governor, the executive director of a state political party, general counsel to numerous campaigns, and as chairman and a longtime member of Virginia’s Board of Conservation and Recreation, which oversees Virginia’s award-winning state park system and conservation programs. He also has served as a board leader for arts and cultural institutions for more than two decades, including the Virginia Opera, the Virginia Symphony, Virginians for the Arts, and CREATOrS, a nonprofit he recently co-founded with the goal of identifying and bringing to artistic realization compelling stories from contemporary political and social life.

When not in the courtroom or the boardroom, Mr. Albert can be found in the outdoors (particularly on a hike, or in a kayak or sailboat), in the midst of musical undertakings ranging from classical to traditional music, or immersed in one of several current writing projects. He is a native of Christiansburg, in the mountains of southwest Virginia, where his family were early settlers, and is a graduate of Harvard College, Oxford University (where he was a George C. Marshall Scholar) and Harvard Law School, where he was Developments Editor of the Harvard Law Review and a Teaching Fellow in the Faculty of Arts and Sciences for Professor Michael Sandel.