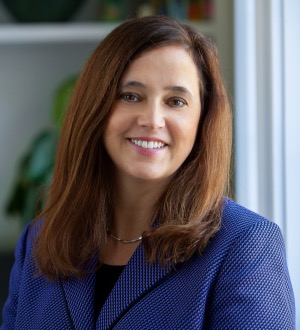 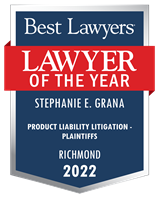 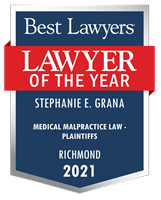 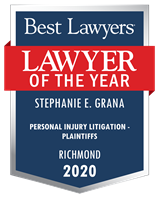 For more than 27 years, Stephanie Grana has fought for individuals and families in Virginia suffering from catastrophic injury and wrongful death as a top Richmond personal injury lawyer. When clients’ lives are turned upside down due to life-changing injuries or the death of a loved one due to someone else’s wrongful or negligent actions, they turn to Stephanie because she has a proven track record demonstrating her expertise and her passion for just compensation on behalf of the injured. In her years of practice, she has recovered more than 50 verdicts and settlements over $1 million.

Her professional integrity and ability to secure results for her clients has earned her an AV® Rating from Martindale-Hubbell, a leading lawyer rating directory. She has personally handled numerous high-profile, high-stakes personal injury cases, and has successfully guided her clients to victory. She has been selected to Best Lawyers in America® specifically for her excellent work in handling medical malpractice cases.

Stephanie has often been recognized for her incredible track record from the very beginning of her career. She was named a Super Lawyers® Rising Star in 2009, 2008, and 2007, and was selected by her peers to the Super Lawyers list every year since 2009 and has consistently appeared in its list of the top 100 lawyers in Virginia, top 50 female lawyers in Virginia and top 50 lawyers in Richmond.

She has received numerous awards and accolades from many other organizations and publications, such as the “Top 40 Under 40” award from Style Weekly (2008), the “Influential Women of the Year” award fromVirginia Lawyers Weekly (2010,2019), the Woman of Achievement award from the Metropolitan Richmond Women’s Bar Association (2012) and she has been inducted as a Virginia Law Foundation fellow.

Stephanie is deeply committed to service to her profession and has been voted by her peers to numerous leadership positions in both local and statewide organizations. She is currently the President of the Virginia Trial Lawyers Association, leading a 2000+ member voluntary association of trial lawyers from across Virginia. She is president-elect of the Virginia chapter of the American Board of Trial Advocates. She is a past-president of the Lewis F. Powell, Jr. America Inn of Court and the Metro Richmond Women’s Bar Association and is a member of the American Association of Justice. Stephanie was selected by The Chief Justice of the Supreme Court of Virginia to serve on the Virginia Model Jury Instruction Committee which writes and edits jury instructions for all Virginia cases. She is currently an active member of the Boyd-Graves Conference and the Virginia State Bar Future of Law Practice Study Committee. She served for 8 years as a member of the Virginia State Bar Disciplinary Committee for the 3rd District.

Motorcycle collision case in which an automobile crossed double yellow lines of two lane road into motorcycle’s lane of travel.

Medical malpractice case involving the death of a man who suffered an anoxic brain injury as a result of alleged failure to properly monitor a sleep apnea patient following a routine surgery.

Verdict in medical malpractice case for a bladder injury to a woman that was caused by mismanaged catheter care, reduced to Virginia’s statutory cap.