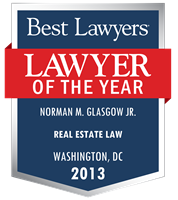 Norman M. Glasgow, Jr. is the practice group leader of Holland & Knight's Washington, D.C., and Northern Virginia Land Use & Zoning Group. Mr. Glasgow represents real estate developers, public and private institutions in zoning, building code and historic preservation law matters, before the Board of Zoning Adjustment, Zoning Commission, State Historic Review Board and Commission of Fine Arts. He also represents clients in street and alley closings, and in that regard, has substantial contact with members of the District of Columbia City Council and has appeared as a witness in many council hearings involving land use matters.

Mr. Glasgow has handled numerous cases before the Board of Zoning Adjustment and has handled and participated in many major Zoning Commission cases. Most of these cases have focused on major downtown District of Columbia office building projects and zonings for properties in emerging opportunity areas such as the downtown east end, and North and South Capitol Street areas among others. He worked extensively on the rewriting of the city's Street and Alley Closing Law.

Because of Mr. Glasgow's extensive experience with complex zoning and building code matters on an administrative level, he has succeeded in obtaining favorable construction-related rulings resulting in significant savings of time and money.

In addition to his private practice, Mr. Glasgow is active in civic affairs, addressing the area's affordable housing crisis. In this regard, he has worked extensively with a number of nonprofit affordable housing providers and community development corporations. Mr. Glasgow worked in conjunction with the D.C. Bar Association to develop standardized zoning opinion letters which are necessary in acquisition and construction financing of property.

463 The Best Lawyers in America® awards

81 Best Lawyers: Ones to Watch in America awards