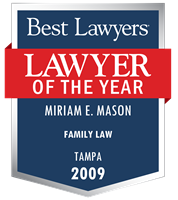 Miriam graduated from the Cumberland School of Law, cum laude, in 1975. She has held numerous positions with the Florida Bar, including serving on the Bar’s Long-range Planning Committee, it’s Civil Rules Committee, its Board of Certification for Marital and Family Law, and as Chair of the Family Law Rules Committee. Her roles in the Family Law Section of the Florida Bar were as Executive Council, Education Chairperson, Secretary/Treasurer, Chair-Elect and ultimately, Chair. She is a former editor of the “Family Law Commentator.” Miriam has also been a Fellow of the American Academy of Matrimonial Lawyers since 1983. She served as President of the Florida Chapter; and, on a national level, the Board of Directors, Secretary and Treasurer, and after a three-year Vice Presidential term, Miriam was named President of the American Academy of Matrimonial Lawyers in 1999. Miriam is a Diplomat of the American College of Family Trial Lawyers and is rated AV by Martindale Hubbell. She is also an Emeritus Master of the Bar and Former President of The J. Clifford Cheatwood American Inn of Court. Miriam has been listed in The Best Lawyers in America since 1993. She is a Board Certified Marital & Family Lawyer by the Florida Bar’s Board of Certification and a Fellow of the American Bar Foundation. Miriam is president of Mason Black & Caballero P.A.