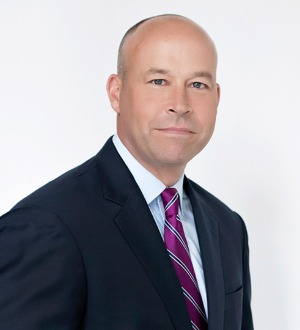 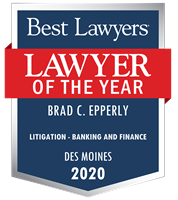 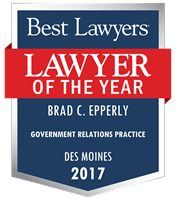 Brad Epperly is a member of the firm's Governmental Affairs Department representing clients as a lobbyist at the state capitol before the legislature, the Governor, and regulatory agencies. His work as legislative counsel involves a broad spectrum of public policy issues, including economic development, labor and employment issues, workers' compensation, gaming, and utilities. In addition, Brad also practices in the areas of creditors' rights, construction law, and general civil litigation, representing Wells Fargo Bank and the Iowa Economic Development Authority, serving as general counsel for the Iowa Girls High School Athletic Union, and representing contractors, subcontractors, and suppliers. Brad began his legal practice with a firm in Omaha, Nebraska, followed by employment as in-house counsel with Norwest Financial, and then as a shareholder with a West Des Moines law firm before joining Nyemaster Goode. Brad has been a regular speaker in the area of creditors' rights. He is a past Board member for the local chapter of the Federal Bar Association and has served on the Board for the youth baseball program in West Des Moines.

BAR ADMISSIONS
Iowa, 1993
Nebraska, 1993
Admitted to practice in the state and federal courts of Iowa and Nebraska.