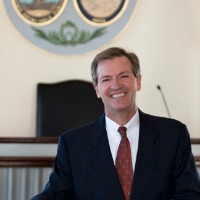 On February 9, 2016, the federal grand jury returned an indictment against , charging him with conspiracy to commit securities fraud and defrauding the SEC.

RMCP is a small South Carolina-based company that develops and distributes innovative products and tools for the medical industry. The company largely focuses on creating and perfecting an auto-retractable vacuum safety syringe. Their primary product— the FDA-cleared RevVac™ Auto-Retractable Vacuum Safety Syringe—was designed to substantially reduce accidental needle stick injuries, using patented vacuum technology to retract the needle directly into the plunger after use, thus preventing its reuse once its safety feature had been activated. RMCP’s RevVac syringe included five international patents and two U.S. patents in order to protect the product and RMCP.

The government contended that fraudulently issued more than 1.2 million shares of RMCP’s stock options to 11 unidentified “consultants” through the use of an S-8 form. The S-8 form is a filing with the SEC that is commonly used by startups and publically traded companies to register securities that will d to its employees via benefit or incentive plans. Simply put, a publicly traded company may compensate consultants with stock options in lieu of cash compensation, provided they perform legitimate services such as legal, accounting, or marketing assistance. The government alleged that these consultants were retained only to raise capital for the fledgling startup. It further alleged that no services were actually provided or intended to be provided.

faced a maximum sentence of 80 years imprisonment. The FBI had investigated the case for two years before a U.S. attorney presented it to the grand jury for indictment. The co-defendant, the former head of RMC’s investor relations team, pled guilty and testified against . Then-attorney Bill Nettles, in reference to the charges against , labeled the resources set aside for the investigation as “significant.”

Defense attorneys Daniel and Sullivan culled through a decade’s worth of company history, reports, filings, contracts, financial documents, and employee backgrounds to prepare for and combat the issues presented by the government.

Daniel focused on each of the consultants and highlighted their individual strengths, they could offer to RMCP, and the potential value they were capable and willing to add to the company. These consultants spanned a variety of careers and backgrounds, including professionals in the fields of health care, insurance, investing, and plastics manufacturing.

Sullivan cross-examined the co-defendant and led through a day of testimony explaining the company and its SEC filings.

Both attorneys carefully cross-examined the government’s witnesses. Among those were FBI investigating agents, forensic accountants, and securities analysts as well as past employees of the medical device company, including the co-defendant.

At the close of the trial, the federal jury returned a unanimous not guilty verdict all three counts of securities fraud and false filings with the SEC. It ordered that acquitted, discharged, and any bond exonerated.

Bart Daniel defends government investigations in the areas of health care, securities, antitrust, and the False Claims Act, among others. Daniel has defended corporate officers and board members as well as 500 companies in a wide range of civil and criminal investigations. While Daniel has extensive experience in trial defending white-collar criminal prosecutions, his greatest wins have come privately convincing prosecutors and investigators to decline criminal prosecution and quietly close their files. Daniel served as U.S. Attorney for the District of South Carolina from and serves as president the National Association of Former United States Attorneys. More information can be found at www.bartdaniel.com.www.bartdaniel.com.