Navigate to map location for Sergio L. Olivares, Jr. Visit the website for Sergio L. Olivares, Jr. at http://www.olivares.mx/es/sergio-l-olivares-jr
Your comment has been submitted!
We have encountered an error and are unable to process your comment at this time. Please refresh the page and try again later.
Add Comment
In making your comments, please do not refer to a pending legal matter.
Share My Profile
Post on Social

Sergio Olivares, Jr. joined OLIVARES in 1987 and today leads the firm with strength and a commitment to transparency, client satisfaction, and personal service. He has been a partner since 1994 and Chairman of the Management Committee since 2009.

Mr. Olivares’ breadth of experience is extensive; he is skilled in the prosecution and litigation of intellectual property rights, including trademarks, copyrights, patents, and unfair competition. He is proficient across all areas of intellectual property law but works most closely with the firm’s Patent Group. Mr. Olivares is highly recommended by leading industry publications and directories as a leader in IP. He has been influential in ensuring that Olivares remains highly innovative, helping to support the firm’s effort to add new practice areas and industry groups that will enable the firm to offer its clients a more comprehensive approach. Mr. Olivares has played a key role in the establishment of many of these new groups, including the Regulatory and Administrative Law Groups and the Life Science & Pharmaceutical and Information Technology Industry Groups.

After his graduate work, Mr. Olivares trained with two prominent IP law firms in New York City—Morgan & Finnegan and Kenyon & Kenyon—before joining Olivares. This deep understanding of US intellectual property law allows him to offer clients clear comparative analyses of the US and Mexican legal systems and to explain complex matters in a way that suits the needs of the firm’s international clients. 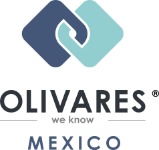 13 The Best Lawyers in Mexico™ awards