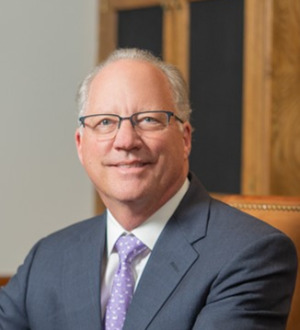 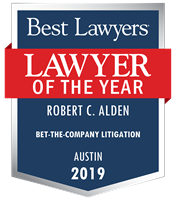 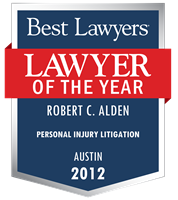 Robert Alden started practicing law in 1987, and joined Byrd Davis Alden & Henrichson as a partner in 2001. In addition to commercial litigation, he tries personal injury, car accident, wrongful death and product liability cases in State and Federal courts. Robert has tried over 30 trials, and has argued several cases before the federal and state courts of appeals. Robert’s practice encompasses a wide range of civil and commercial disputes in areas such as personal injury, real estate and partnership disputes, products liability, construction defects, professional malpractice, corporate director and officer liability, and deceptive trade practices. He is certified by the Texas Board of Legal Specialization in Civil Trial Law and Personal Injury Trial Law.

Robert has been rated “AV,” the highest peer review rating, by Martindale Hubbell since 1996. He has been recognized by Best Lawyers in America as one of the best lawyers for commercial litigation, Plaintiff’s personal injury litigation and “bet-the-company” litigation, and was named “Personal Injury Trial Lawyer of the Year” for 2012 by Best Lawyers. He has also been named as a “Super Lawyer” beginning in 2005. Super Lawyers are chosen by Thomson Reuters and published in Texas Monthly magazine.

Robert is member of the State Bar of Texas and admitted to practice in all Texas state courts. He has been admitted to the United States Supreme Court, the Fifth Circuit Court of Appeals, and the United States District Courts for the Northern, Southern, Eastern and Western Districts of Texas

Robert earned his Juris Doctorate with “high honors” from the University Of Texas School Of Law. Robert received honors in law school as a Chancellor and Order of the Coif. He was also an editor of the Texas Law Review. He received a Masters of Public Affairs with highest honors, and Bachelor of Arts degree with honors from the University of Texas at Austin.

Plaintiff Awarded over $900k for injuries in car accident

Robby Alden is interviewed by KVUE newsregarding the officer shooting of a North Austin resident.

"Robby is an excellent lawyer who produces results. He is creative in his approach and does not just "work the file". He is an adversary who opposing counsel want out of a case. Also, he provides bold estimates and then comes through. In one case with a massive number of plaintiffs and defendants, he predicted that we would be the first defendants to be dismissed. His prediction proved true. I have known him for over 20 years; he is as honest and fair minded as lawyers come."

"In my experience, Mr. Alden demonstrated a deep understanding of the law in general and an impressive familiarity with a wide range of specific statutes and rulings. In addition, he was always well prepared. These attributes make him a very good lawyer. In my opinion, Mr. Alden exceeds even that ranking, thanks to his ability to anticipate another party's strategies and prepare accordingly. His unflappable nature and well-honed communications skills make him a formidable force in the courtroom. From our first meeting, I felt a sense of confidence in Mr. Alden that put me at ease. From that point on, he exceeded my already-high expectations at every turn."

"Mr. Alden is a very thoughtful and highly capable individual. His excellence in character, exceptional knowledge, attention to detail, and effective communication skills serve him well. My experience is that Mr. Alden is very proficient and easy to work with."

"Mr. Alden proved to be a competent, knowledgeable, and calming force during a very stressful and frustrating time for my company. His understanding of the law concerning our particular issue was not only reassuring, but also exceeded that of our opponent's attorneys. More importantly, Mr. Alden's dedication to helping us was clearly evident in his preparation and tenacity throughout the whole ordeal. I must also praise him for his fairness and openness concerning his billing. We understood exactly what we were being billed for and why. Not once did we feel the fees were out of proportion or extreme in any way. Hopefully, my company will not need the services of an attorney for such a situation again, but if we do, our first call will be to Robert Alden."