As many of you know, we at Oppenheim Law were invited to submit a friend of the court brief in the Supreme Court case of Mary Ann Glass v. Nationstar Mortgage in which the issue before the Court was whether a borrower in a foreclosure action is entitled to attorneys’ fees when the borrower successfully disputed the bank’s standing to bring the action. In late December, we were extremely pleased to learn that the Court had ruled in Ms. Glass’ favor determining that, even though Nationstar Mortgage was not the original party to the note and mortgage, the subsequent lender was still subject to attorney fee provisions. Even though the plaintiff bank did not have standing to bring the suit in the first place.

Obviously, this was an important decision because many people are unable to fully afford the cost of a full foreclosure defense, and it is only through the attorney fee provision and applicable law that the playing field is leveled so that borrowers who have legitimate defenses against banks have an opportunity to assert them in a court of law. Unfortunately, however, in an unusually bizarre set of events, the Supreme Court after a change in Justices decided that the Court in fact had made a mistake in granting itself the jurisdiction to hear the case and decided that they had no authority to even review the case and thus decided to revoke their opinion. The Court called their decision to grant initial jurisdiction as “improvident”.

The Effect of the Ruling or What is Going On???

The reality, however, is that the Court’s decision to revoke their jurisdiction is in fact respectfully “improvident.” Foremost, by reversing its decision on its ability to even hear the Glass case, the outcome of the case has changed, creating the impression that the golden rule is alive and well or otherwise known as the Wall Street Rule , and that is the big banks make the rules. For the past half century, the rule has always been that when a bank loses a foreclosure case the prevailing party whether being the borrower or homeowner would be entitled to attorney fees. This was a giant change not just in law but in policy that only came about after a change in personnel at the Supreme Court. One can only shake one’s head and raise a distinct eyebrow as to how the Court could have made such a drastic switch that will unfortunately affect countless homeowners and borrowers by this unfortunate decision.

I always thought that it would be awesome to be a Supreme Court Judge and be above the political fray, having the ability to judge each case on its perspective merits regardless of the disparity of power or influence between respective parties. Many of us were raised to believe in the judicial process, understanding that judges look at each case insularly and apply the law fairly. In this particular case, whether the judges in fact did that or not is not relevant because there has already been a public outcry as demonstrated by an article in the Daily Business Review whereby numerous attorneys, including myself, question the wisdom of the Court revoking an opinion that had previously been issued by their very own Court, albeit with different judges.

If the court really believed that their opinion was wrong or erroneous, they should have done what most Supreme Courts, including the United States Supreme Court have done—which is to hear another case with similar facts and then provide a new opinion. In this case, the Court, without even giving an opinion, merely stated that they had made a mistake by improvidently providing jurisdiction to the Glass case in the first place. Ironically enough, the jurisdiction that the court had provided was based on a split in the Circuits where the First and Fourth Circuits had clearly a diverse perspective on this issue. The Fourth District did not grant attorney fees when homeowners had prevailed in foreclosure due to lack of standing; yet, the First District had. Bottom line: The Supreme Court reversed its former opinion, citing only that jurisdiction was “improvidently granted”—and denied the borrowers the opportunity for a true day in court where their arguments would not just be heard but also considered.

Needless to say, the question of a prevailing homeowner being entitled to attorney fees when a bank erroneously and improperly files a foreclosure is far from over. There are numerous other ways for homeowners and borrowers to seek damages from banks that have improperly filed foreclosures. It is just unfortunate that in the State of Florida, time and time again, it appears questionable as to whether the judiciary is concerned with the shadow that the case shall cast and the suggestions of unfairness that clearly arise from such a decision. I was quoted as stating that this is one of the darker days of Florida jurisprudence as well as foreclosure jurisprudence in the State of Florida for, at the end of the day, questions as to the integrity of the judicial system arise. I venture to guess that through the sands of time we lawyers and judges in the judicial system will be judged poorly. I had always thought that by preserving the integrity of the process we would be always preserving the integrity of the system. What has happened in the Supreme Court’s turnaround of this case clearly calls into question the integrity of both the process and the system as a whole.

We will continue to fight for what is just.

About Roy:
Roy Oppenheim is a sought-after legal expert on issues relating to real estate, real estate litigation and commercial litigation. In 2009, he started the South Florida Law Blog to address the real estate market and foreclosure crisis. The Blog has been voted the best business and technology blog by the South Florida Sun-Sentinel. Mr. Oppenheim has been a contributor to Yahoo! Homes, featured on HuffPost Live, FOX News, and Lifetime TV, and quoted in prominent national publications, including USA Today, The New York Times, Huffington Post, WSJ, US News and World Report, The Financial Times, the National Law Journal,Florida Bar News, Sun Sentitnel and Miami Herald. Most recently, Mr. Oppenheim hosted an Ask Me Anything on Real Estate on Reddit. Mr. Oppenheim has also co-authored two law review articles: Deconstructing The Black Magic of Securitized Trusts, and The Emperor’s New Clothes.

Steve Yerrid, a Career as One of America’s Top Trial Lawyers

His stellar legal accomplishments and courtroom records speak for themselves. 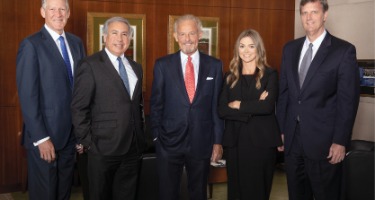