The vast majority of federal government contracts are awarded based on competitive procurements through either sealed bids or competitive proposals. Bidders in procurement, though, will occasionally come to believe the government’s solicitation was defective or the award decision unreasonable. In such cases, the unsuccessful bidder may want to file a bid protest. What does that entail?

Pre-award bid protests, generally, are challenges to the terms of the solicitation. Some common ones posit that:

Post-award bid protests, by contrast, are typically challenges to the agency’s evaluation of the bids/proposals or the award decision, although the bases of post-award protests vary depending on whether the procurement was sealed-bid or competitive negotiation. Some common bases for sealed-bid procurements claim that:

Some common bases of post-award protests on competitively negotiated procurements include claims that:

Where Can a Protest Be Filed?

There are pros and cons for each forum.

There are complex rules about when pre-award and post-award protests must be filed, and late protests will almost always be dismissed. Below is some general information, but the protester should consult with counsel regarding the applicable time frame in which to file a protest. 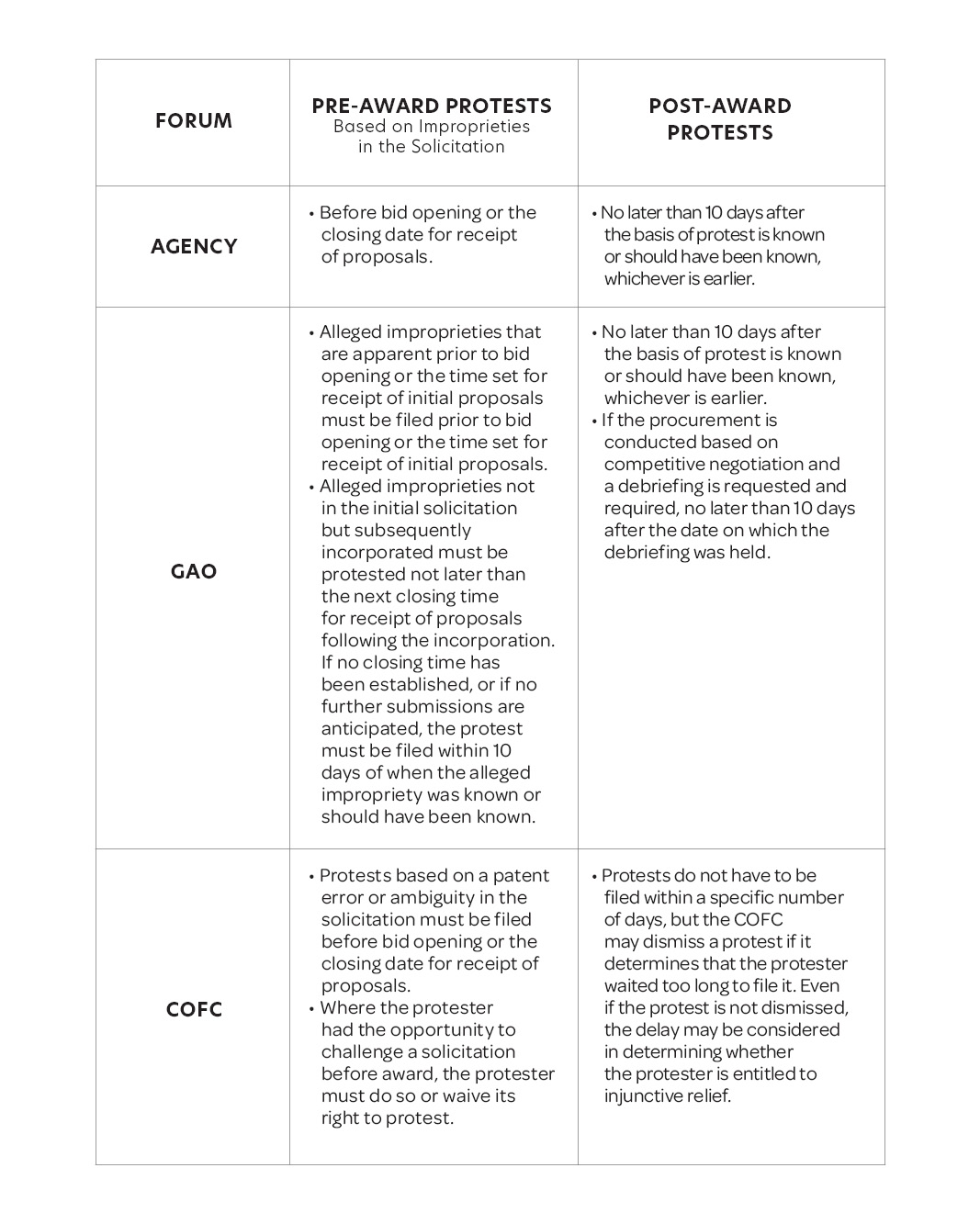 To be granted an automatic stay, the protester must follow strict timing requirements. If the award has not yet been made, filing the protest will stay the award of the contract. If the award has been made, filing the protest will stay performance of the contract if the agency protest is filed or the GAO notifies the agency that a protest has been filed within: (1) 10 days after contract award; or (2) five days after a debriefing date offered to the protester when the protester made a timely request for a required debriefing. The agency, however, may override the automatic stay if it determines that there are “urgent and compelling” circumstances.

Protest remedies can vary to a certain extent based on the protest forum. In agency protests, the agency may act upon the recommendation of the GAO if the protest was filed there, as well as pay appropriate costs, which typically encompass the costs of filing and pursuing the protest, including reasonable attorney, consultant and expert witness fees. The agency also may pay bid and proposal preparation costs, though agencies generally will not pay these if the protester, as part of the remedy, will be given another opportunity for its bid or proposal to be considered for award. The agency will not pay lost profits.

The GAO may recommend as well that the agency do one or more of the following:

If a disappointed bidder believes that a procurement was conducted unfairly or the award decision was flawed, filing a bid protest can provide the bidder with another opportunity to potentially obtain an award. Protesters need to carefully review their options for where (and when) to file a protest. Bid protest rules can be complex; as such, protesters should discuss their options with experienced bid protest counsel.

These Paper Tigers Have Teeth!