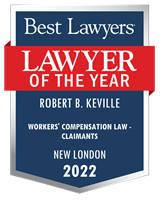 Attorney Keville's practice focuses on the representation of injured workers in both State and Federal Worker's Compensation forums, as well as serious personal injury claims. He has tried numerous cases to conclusion and has appeared before various Appellate tribunals, up thru and including the State of Connecticut Supreme Court. Although the bulk of Attorney Keville's practice is on the side of the injured worker, he has also represented the side of various employers, including the Town of Groton in defense claims.

Prior to entering the practice of law Attorney Keville was a teacher and coach for nine years, primarily at Hamden Hall Country Day School, in Hamden CT. A four year varsity letterman in lacrosse at Springfield College, Attorney Keville has been active in the lacrosse community in Connecticut as a player, coach and referee. He is one of the founding members of the East Lyme Youth Lacrosse association where he served as a coach and director for many years.