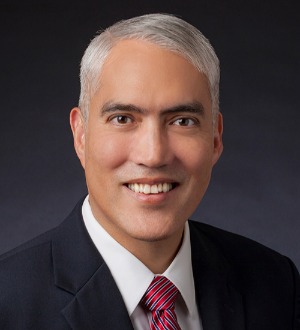 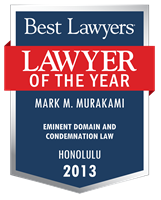 Mark Murakami practices in the firm's Dispute Resolution, Real Estate, Construction, and Business & Commercial Law practice groups. His focus is on complex commercial disputes, land use negotiation and litigation, environmental, and general civil litigation. He has appeared in all federal and states courts in Hawaii, most of the administration boards and commissions, and is licensed in the U.S. Supreme Court, Ninth Circuit Court of Appeals and Court of Federal Claims. He is rated by Martindale-Hubbell.

He is included on the Best Lawyers® list for Hawaii in the categories of: Eminent Domain & Condemnation Law, Land Use & Zoning Law, and Litigation-Real Estate. He was Best Lawyers' Lawyer of the Year for 2013 for Eminent Domain & Condemnation Law. He has recently been awarded the CRE (Counselor of Real Estate) credential by The Counselors of Real Estate, an international group of high profile real estate practitioners who provide expert advisory services to clients. Membership in The Counselors of Real Estate is selective and is extended by invitation only, Mark is one of only two lawyers in Hawaii to receive this recognition.

Mark was the Valedictorian of the Class of 1999 from the William S. Richardson School of Law at the University of Hawaii where he served as Articles Editor of the University of Hawaii Law Review. He has received numerous academic awards, including: Dean’s Scholar, Porter Scholastic Award (twice); Awards for highest grade in Property I, Torts I, Contracts I, Corporations, and Professional Responsibility; Kono Award for Academic Achievement; Phi Delta Phi Professional Responsibility Award; HSBA Real Property and Financial Services Section Award.

He is also a graduate of the U.S. Coast Guard Academy in New London, Connecticut. He served for 13 years on active duty before joining the U.S. Coast Guard Reserve in 2005. During his time on active duty, he served on three different Coast Guard cutters, including command of a patrol boat in California. He spent four years assigned to the Fourteenth Coast Guard District Legal Office, prosecuting courts-martial, litigating cases in federal court as a Special Assistant U.S. Attorney, and advising Coast Guard officials on maritime, criminal, environmental and international law issues.

Mark authors a blog on federal litigation and maritime law, in and around Hawaii and Oceania, please visit: http://www.hawaiioceanlaw.com

Mark was born on Maui and raised in Kailua, Oahu. He is a graduate of Kailua High School and was active in the Castle Performing Arts Center. He is married to Kimberly A. Murakami, has one son, Tyler, and one daughter, Kyra.

Highlights of his experience: