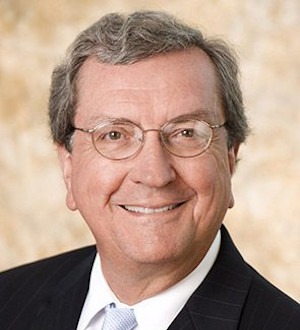 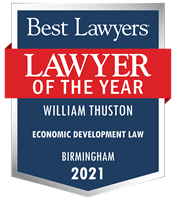 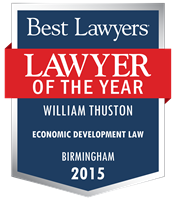 William "Lee" Thuston is the Chairman of Burr & Forman overseeing the firm's Executive Committee as well as strategic initiatives, business development, and client service programs. Prior to becoming Chairman, Lee had served as Firm Managing Partner since 2005. Lee practices in the Corporate/Tax practice group where he focuses on economic development, business and succession planning, trusts and estates, and tax law.

Lee also negotiated the incentives packages with the State for the 2009 expansion of the Mercedes-Benz plant. Additionally, Lee represented Kia Motors Corporation with the site selection and implementation of its incentive package for the development of its plant in West Point, GA, as well as the ThyssenKrupp steel mills located in Mobile County, AL, and the Jack Daniel Cooperage Project located in Lawrence County, AL.

Lee was instrumental in boosting the State’s profile in the aerospace industry by working with public and private entities to create a desirable environment – legally, tax-wise, economic and socially – to attract Airbus to build a manufacturing facility in Mobile, AL.

In addition to working directly with State government and the Department of Commerce, local government, and developers, Lee is actively involved with organizations like the Birmingham Business Alliance – the organization that created Blueprint Birmingham, and the Alabama Automotive Manufacturer’s Association.

"Lee Thuston is one of the best lawyers in the country. He is a deal maker and is truly a business partner."

"William Lee Thurston is an outstanding legal and business adviser. Integrity is his strong point. Lee is one of the best attorneys I have had the pleasure to work with."

"Burr & Foreman is an excellent firm, and Lee Thuston blends legal knowledge and business sense better than any attorney I have ever worked with."

"Lee Thuston played a key role in helping bring Mercedes-Benz U.S. International, Inc. to Alabama. Not only does Lee have vast knowledge and experience, he is extremely associated with and networked throughout the State of Alabama. He truly cares about his clients and is fully aware that "results matter." As Managing Partner at Burr & Forman, he has worked diligently to establish Burr & Forman's presence as the leading economic and development law firm in the Southeast."