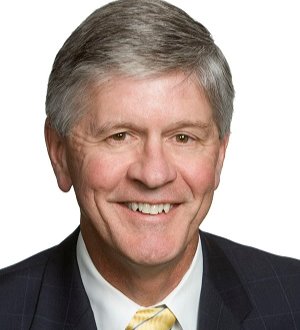 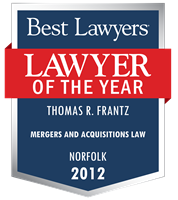 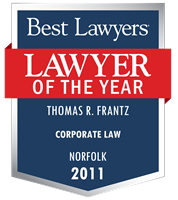 Tom Frantz draws on his tax background and maintains a robust corporate legal practice as a Partner representing multi-national corporations, handling major mergers and acquisitions, and advising corporations on a variety of legal matters. In addition, he is actively engaged in regional and statewide issues across the Commonwealth of Virginia.

He currently serves as Chairman Emeritus of the Board for Williams Mullen and previously served as President and Chief Executive Officer of the firm from 2010 to 2015. Before joining the firm, Tom was an original principal with Clark & Stant, which merged with Williams Mullen in 1999. He became General Counsel to Tidewater Health Care, Inc., the parent company of Virginia Beach General Hospital, in 1989. He currently serves as Outside Corporate Counsel to Armada Hoffler Properties, Inc., a NYSE REIT. He is admitted before the U.S. Tax Court, the U.S. Supreme Court, the United States Fourth Circuit Court of Appeals and all Virginia courts.

Tom has been listed in The Best Lawyers in America© for each year of publication since 1983 and was named the Best Lawyers’® 2011 Norfolk Area Corporate Lawyer of the Year and 2012 Norfolk Area Mergers & Acquisitions Lawyer of the Year. He has also been named to Virginia Business magazine’s list of “Legal Elite” (2008-present). Tom has been recognized as a leading Corporate/M&A attorney in the U.S. by Chambers USA (2004-present) and named a “Super Lawyer” for Business/Corporate by Virginia Super Lawyers magazine (2006-present). Virginia Super Lawyers magazine listed him as one of the "Top 50 Attorneys in Virginia" every year from 2006 to 2011, and in 2008, he was listed as one of the “Top 10 Attorneys in Virginia.” In addition, Martindale-Hubbell has rated Tom an AV attorney, its highest rating available.

Long active in numerous civic and educational organizations, Tom is a former Chairman of the Board of Cape Henry Collegiate School, the Virginia Beach Foundation, the Hampton Roads Partnership and the Virginia Aquarium and Marine Science Center Foundation. He is the former President of Virginia Beach Vision. Tom is a member of the board of directors and the executive committee of the Neptune Festival, having served as King Neptune in 1996.

124 The Best Lawyers in America® awards

24 Best Lawyers: Ones to Watch in America awards

"Tom is excellent at analyzing situations and gives ample time to learn about his clients business."