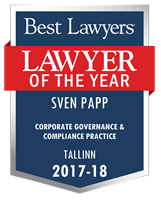 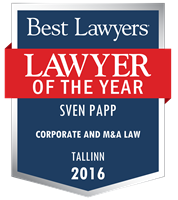 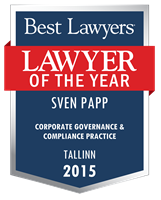 Sven Papp is one of the leading and most respected corporate and M&A lawyers in Estonia with uniquely broad domestic and international experience both as an attorney and as general counsel as well as business consultant, which includes the following positions: attorney at White & Case New York (1989-1990) and in Stockholm (1991-1992), associated legal counsel of Swedish-French strategic management consulting firm SIAR-Bossard in Stockholm (1992-1994) and general counsel of Swedish Match East Europe in Stockholm (1994-1998). Sven has an unrivalled track record having over the past 25 years acted as lead counsel for more than 1,200 landmark local and international M&A transactions across the Baltic and Nordic region. Sven has also served as board member and corporate secretary of a number of top ranked companies (Estonian Telekom, Estonian Tobacco, national electricity company Eesti Energia, Estonian Recycling company, Tere AS, etc.). Sven is lecturer at Tartu University on M&A and a frequent speaker at national and international conferences. Estonian media has recognised Sven as opinion leader on M&A and business activity topics in Estonia and Baltics.

13 The Best Lawyers in Estonia™ awards