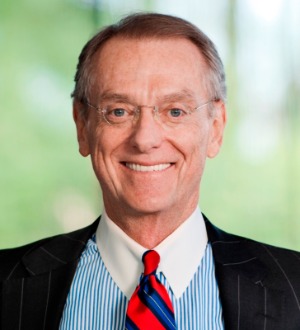 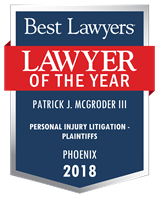 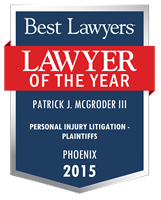 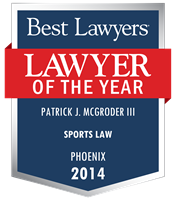 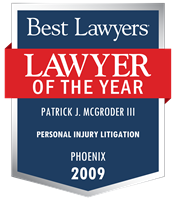 Pat has been recognized by his peers as one of the finest trial lawyers in America. He specializes in high profile, catastrophic injury and wrongful death litigation. As an architect of social change, Pat has been on the cutting edge of litigation that has led to HMO reform, road design improvement, motor vehicle and aviation safety changes and nursing home regulation.

During forty years of trial practice, Pat has been lead counsel in more than 100 cases in which there has been a verdict or settlement in excess of $1,000,000, having recovered over $500 million for his clients during this time. Pat’s litigation success is only matched by his commitment to social justice in his community and his philanthropy. In 2010, he was inducted into the Maricopa County Bar Hall of Fame for decades of excellence in the practice of law. In recognition for his “unfailing commitment to the principles of professionalism, decency and civility in the legal profession,” Pat was recently awarded the Ken Clancy Memorial Award by the American Board of Trial Advocates.

Pat is a Fellow and Past President of the International Academy of Trial Lawyers, a Fellow of the American College of Trial Lawyers and a Fellow of the International Society of Barristers. He has been selected as one of the 10 Best Lawyers in Arizona by the AZ Business Journal. Since 2008, he has been selected by Lawdragon as one of the 500 best lawyers in America. Pat was named by Best Lawyers in America as 2009 “Phoenix Personal Injury Litigator of the Year.” In 2005, he was a co-finalist for the National Trial Lawyers for Public Justice “Trial Lawyer of the Year” for his work in representing victims of fuel-fed fires in Ford police vehicles. In 2012, he became the third American to be named an Honorary Bencher to the Society of Kings Inns in Ireland for his work with the Barristers of Northern Ireland and the Republic of Ireland.