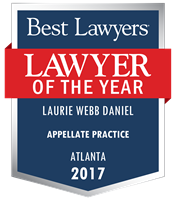 Laurie Webb Daniel is chair of Holland & Knight's Appellate Team. Based in Atlanta, she has appeared in appellate and trial courts nationwide, including the U.S. Supreme Court. Ms. Daniel is known for her approach to complex litigation, which combines the skills of an appellate advocate with those of substantive specialists at the start of the case to ensure that legal issues are well positioned for a favorable outcome – whether in the trial court or on appeal. As a result, in addition to handling appeals, Ms. Daniel routinely assists trial lawyers (at outside firms as well as her own) with high stakes litigation. Ms. Daniel has served as a commentator for CNN on Supreme Court arguments and on the faculty of many continuing legal education programs. She has served twice as chair of the American Bar Associations Standing Committee on Amicus Curiae Briefs. She also was part of the American Bar Association's "reading group" that vetted the writings of U.S. Supreme Court Nominee, now Justice, Sonia Sotomayor.