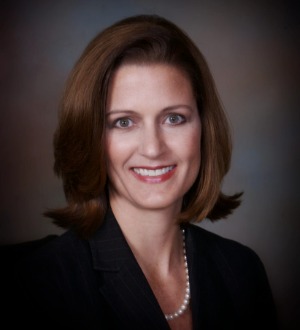 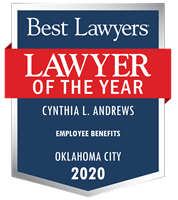 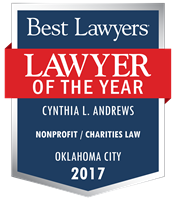 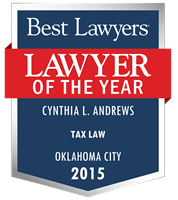 Cindy L. Andrews serves as a director in the Firm’s Oklahoma City office. A practitioner since 1994, Cindy brings to Crowe & Dunlevy experience in several areas of law, including employee benefits, trusts and estates, mergers, acquisitions and divestitures, taxation, and partnership. A certified public accountant (inactive), Cindy holds several licenses to practice law, including the U.S. District Court (Western District of Oklahoma) and the U.S. Tax Court. Recognized in her field, she is listed in The Best Lawyers in America for tax law and employee benefits law, and is a member of both the Oklahoma and American Bar Association.

In addition to practice, Cindy has taught Lobbying by Non-Profit Organizations and Probate seminars for the Oklahoma Bar Association. She has also been an integral part of several of the organizations she has been involved with, as she was the director for both the University of Oklahoma College of Business Alumni Association (1999 – 2001), as well as the Big Brothers, Big Sisters of Greater Oklahoma City (1999 – 2002).

75 The Best Lawyers in America® awards