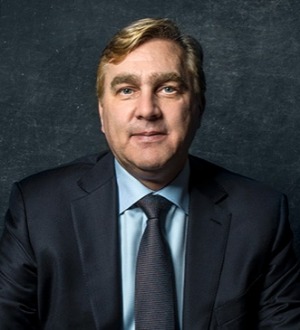 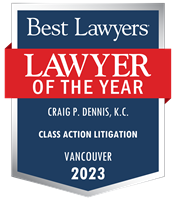 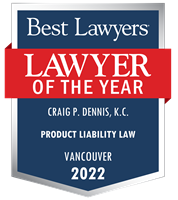 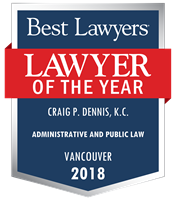 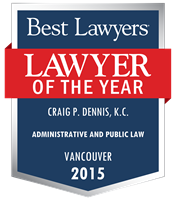 For 29 years, Craig Dennis, Q.C. has represented clients in significant litigation matters at the trial and appellate levels. Craig is a partner at McEwan Partners LLP. His practice has a business focus with an emphasis on the effective resolution of complex commercial disputes. His litigation expertise includes the defence of class actions, professional liability, shareholder and related corporate disputes, product liability, land-related disputes, as well as administrative and constitutional law.

Legal industry publications consistently recognize Craig as leading counsel in the area of corporate and commercial litigation and dispute resolution, with additional recognition in the areas of class actions and product liability. Best Lawyers in Canada twice has recognized Craig as “Lawyer of the Year” in Administrative and Public Law, Vancouver (2015 and 2018) and most recently in Product Liability Law (2022). In addition, Benchmark has placed him among the Top 50 Trial Lawyers in Canada in 2020 and 2021, and Chambers Global includes him among Canada’s top litigators in 2021. Craig is also a fellow of the Litigation Counsel of America.

In addition to the courts, Craig has appeared before a wide range of administrative tribunals. He has acted as counsel before the Securities Commissions of both British Columbia and Alberta, the Environmental Appeal Board, the Health Professions Review Board and such professional regulatory bodies as the Law Society of British Columbia and the College of Physicians and Surgeons of British Columbia. Craig also has experience as a neutral and is a fellow of the Chartered Institute of Arbitrators.

Craig is a frequent speaker and contributor to legal education. He has spoken and written for Continuing Legal Education on various topics, including appellate advocacy, trial advocacy, and expert evidence. In addition, he has taught in advocacy programs put on by the Advocates’ Society and the Canadian Bar Association, teaches in the trial advocacy course at UBC’s Allard School of Law, and contributes as a speaker to the Inns of Court program for junior barristers.

As an author, Craig’s work has been cited by the Supreme Court of Canada. He serves on the advisory board for the Class Action Defence Quarterly and has written on class actions for that journal. He is the author of the chapter on professional negligence in a work on Business Disputes published by the Continuing Legal Education Society of British Columbia.

Craig began his legal career as a judicial law clerk at the Supreme Court of Canada for the Right Honourable Beverley McLachlin (then puisne justice). He holds an LL.B from the University of Toronto and an LL.M from Harvard Law School.