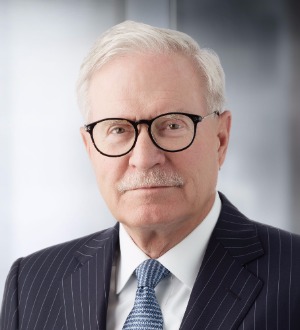 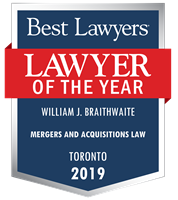 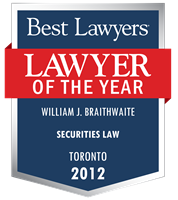 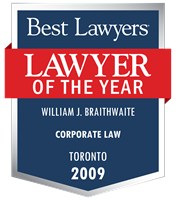 William Braithwaite is senior counsel at the firm and was Chair of the firm from 2012 to 2018. He previously served on the firm’s Partnership Board and Executive Committee, and is the former Head of the Corporate Group in the Toronto office. Bill practises primarily in mergers and acquisitions and corporate finance. In addition to acting on some of the most significant cross border merger transactions, he has acted as counsel to major Canadian corporations, boards of directors, and institutional shareholders, as well as various governments and regulatory authorities.

In 2018, Bill was recognized in Canadian Lawyer magazine’s annual peer survey as one of the Top 25 Most Influential Lawyers in Canada with voters saying, “Bill is not only one of the most outstanding corporate commercial lawyers in Canada, he has lent his status in the legal and business community to help organizations that promote the fundamental values of our profession.”

“One of the captains and commanders of deals – he can manage a team on a deal like very few can. He gives great comfort to the client and has the ability to focus on what's important in a deal and how to get it done.” – Client interview, Chambers Global

170 The Best Lawyers in Canada™ awards

13 Best Lawyers: Ones to Watch in Canada awards