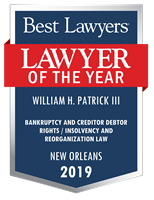 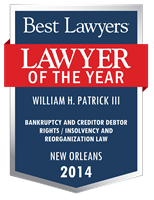 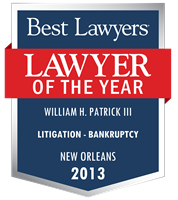 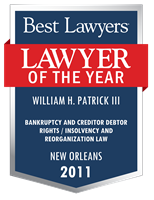 He also represented the Chapter 11 Trustee in liquidating the assets and distributing the proceeds to investors in Pooled Pension Fund Management Corporation, which was essentially a ponzi scheme. He has been principal reorganization counsel to the debtors in possession in the bankruptcy cases of Communications Corporation of America (27 television stations in several states); OCA, Inc. (largest manager of orthodontic practices in the United States); Legends Gaming Company (owner and operator of two casinos and hotels in Bossier City, La. and Vicksburg, Ms.); Harrah’s Jazz Company (owner of the land-based casino in New Orleans) and its publicly-traded successor, Jazz Casino Company; and Clean Harbors Plaquemine, LLC (owner and former operator of hazardous waste injection well).

Mr. Patrick represented the holders of $230 Million in secured bonds in the bankruptcy case of Entergy New Orleans, Inc., the owner of the public utility for New Orleans, La. He has also represented official creditors’ committees in the bankruptcy cases of Grand Palais Riverboat, Inc. (riverboat casino in New Orleans) and Hollywood Casino Shreveport (riverboat casino and hotel in Shreveport, La.), and several thousand Louisiana breast implant claimants in the Dow Corning bankruptcy case in Michigan. He was counsel for corporate governance issues and issues related to the Apollo/Parks Township settlement (nuclear exposure claims) in the mass tort asbestos case of The Babcock & Wilcox Company. He has also represented debtors and creditors in reorganization cases involving nursing homes, hotels, apartment complexes, real estate developments, shopping centers, industrial contractors, and a variety of other gaming companies and retailers. He speaks frequently at seminars and continuing legal education events.