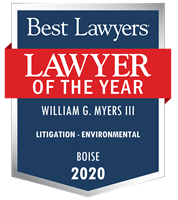 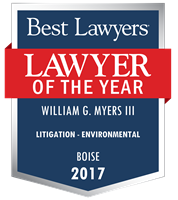 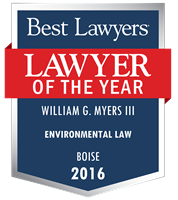 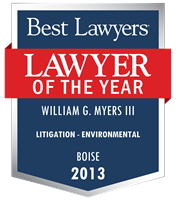 Mr. Myers provides seasoned and effective representation to clients in energy, natural resources, and public land law. He draws from a depth of experience including his service as the Solicitor of the U.S. Department of the Interior.

As Solicitor, Mr. Myers was the chief legal officer and third-ranking official in the Department. He supervised an office of more than 300 attorneys in 19 locations nationwide. He advised the Secretary and other officials on appellate and trial matters as well as policy and administrative issues. He also worked closely with the Department of Justice and other federal agencies. Interior's jurisdiction covers approximately 20 percent of nation's surface estate and a significant amount of the nation's minerals.

Mr. Myers also served as Deputy General Counsel for Programs at the U.S. Department of Energy. He directed the work of agency attorneys in the areas of international energy, civilian nuclear energy, DOE contracts and regulatory intervention. Prior to DOE, he served as an Assistant to the Attorney General in the United States Department of Justice. Mr. Myers began his tenure in Washington, D.C. as legislative counsel to U.S. Senator Alan Simpson of Wyoming, specializing in energy and natural resources issues. Prior to that, he practiced law in Wyoming.

Mr. Myers is admitted to practice in Idaho, Wyoming, Colorado and the District of Columbia, as well as numerous federal courts including the United States Supreme Court.

183 The Best Lawyers in America® awards

61 Best Lawyers: Ones to Watch® in America awards

"Mr. Myers is a very experienced attorney whose understanding of his areas of focus is second to none. He provides thorough analysis and advice in a timely manner and with clear communications. He has been very responsive to our needs and a key "member" of our development team."