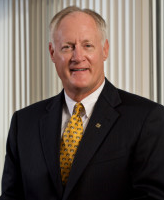 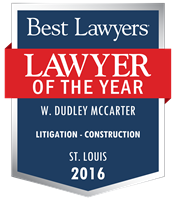 He is also a multi-year recipient of the Missouri Bar Foundation’s W. Oliver Rasch Award, given annually to the author of the most outstanding substantive article published in the Journal of the Missouri Bar (1985, 1989, 2006). Having tried cases in United States District Court for the Eastern District of Missouri and in the Missouri Circuit Courts, Dudley is rated “AV” (the highest rating possible) by Martindale-HubbellSM, and has been selected by his peers for inclusion in The Best Lawyers in America for the last eight years.

Dudley is active in many charitable and civic organizations. He served on the Board of the Children’s Trust Fund of Missouri, the Missouri Foundation for the Prevention of Child Abuse, and was Chair of that organization from 2001 to 2003. He is currently serving on the Advisory Board of the St. Louis Crisis Nursery. He has been on the faculty of the Missouri Trial Judges College every year since 1997.

Dudley and his wife Elizabeth, who is also an attorney, have three children: Katherine, Elizabeth, and Emily.