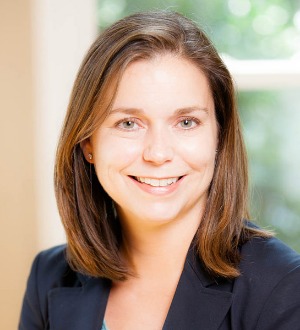 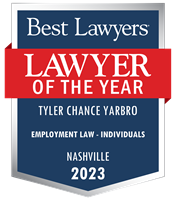 Yarbro has been selected by her peers for inclusion in the 2016-2018 Editions of The Best Lawyers in America©. She is currently listed in the three fields including labor and employment litigation. She was a member of the 2012 TBA Leadership Law Class, and the Nashville Post named her one of “Nashville’s Law Leaders Rising.” She is a four-time Nashville Business Journal “Best of the Bar” honoree, and in 2014 she was named to the Mid-South “Rising Star” List–a designation given to no more than 2.5% of attorneys in the state. Each year since 2014, the Tennessee Supreme Court has named her an “Attorney for Justice,” signifying that she has devoted at least 50 hours per year to pro bono legal work.

Since 2016, Yarbro has served as an Adjunct Professor of Law at Vanderbilt University, teaching a course in trial advocacy to law students.

Prior to joining Dodson Parker Behm & Capprella, PC, Yarbro worked at Nashville’s Metropolitan Public Defender’s Office representing thousands of indigent clients facing every level of offense. Whether the charge was as minor as disorderly conduct or as serious as first-degree murder, Yarbro sought to provide informed, conscientious, and passionate advocacy for her clients. As a public defender, Yarbro appeared in court nearly every day and helmed numerous jury trials. She was also qualified under the Tennessee Supreme Court rules to serve as co-counsel on capital cases.

Outside the office, Yarbro was nominated by the Mayor and appointed by the Metro Council to the Greenways and Open Spaces Commission. Previously, she served on the Community Corrections Advisory Board for nine years. She also serves on the YWCA Advocacy Committee and on the board of directors for the foundation supporting the Human Trafficking Survivors Court. She is also very involved in the life of Christ Church Cathedral. She recently completed a three-year term on the parish vestry and is currently serving as Chair of the Strategic Plan Implementation Committee.

She is married to Jeff Yarbro, also an attorney. They have two children.