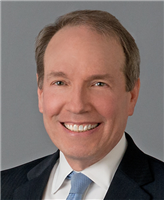 Tom Heywood is the Managing Partner of Bowles Rice, and a former Chief of Staff to the Honorable Gaston Caperton, Governor of the State of West Virginia.  He has significant experience in health care, corporate, finance and commercial law, and is recognized as one of the “Best Lawyers in America” in several professional, peer evaluation publications.  He serves on the firm’s Executive Committee and is Chairman of the firm’s Government Relations group.

Mr. Heywood earned his law degree in 1982 from Harvard Law School, where he served as Developments Editor of the Harvard International Law Journal (1981-82) and Editor of the Harvard Law Record (1980-82).  He graduated from Stanford University in 1978, where he earned a Bachelor of Arts degree in International Relations, with distinction, and was elected to the Phi Beta Kappa Honorary Society.

Upon graduation from law school, Mr. Heywood clerked for the Honorable John A. Field, Jr., Senior Judge for the U.S. Court of Appeals for the Fourth Circuit.  He joined Bowles Rice in 1983.  From 1989 to 1990, Mr. Heywood served as Counsel to West Virginia Governor Gaston Caperton, and from 1990 to 1993 he served as Governor Caperton’s Chief of Staff.  He returned to Bowles Rice in 1993.

In 2009, Mr. Heywood was appointed by Governor Joe Manchin, III to serve as a member of the Judicial Reform Commission. The Commission was charged with evaluating West Virginia’s judicial system and its current practices and providing its findings to the Governor for the West Virginia Legislature.

He serves on numerous charitable and non-profit boards, and participates actively in various business and trade associations.
Read more on firm website

"Mr. Thomas Heywood is one of the most respected attorneys (and leaders) in West Virginia. His contacts and insights are peerless and have been of great value to our insurance company. I strongly support Mr. Heywood and his firm."

"Mr. Heywood is a respected source of information and guidance for our insurance company. He has guided our board and senior officers in governance and regulatory issues that would swamp a lesser attorney. His remarks are always well thought out and fact based -- he is a counselor in every sense of that word. He brings intellectual honesty to every situation -- a trait that makes him a giant in the legal community of our state."

"Thomas Heywood is an outstanding attorney and a person with the highest standards of integrity. He is one of the best anywhere."