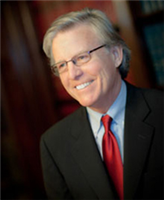 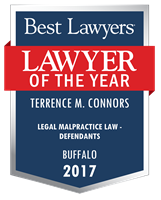 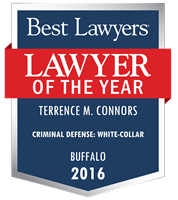 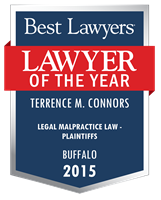 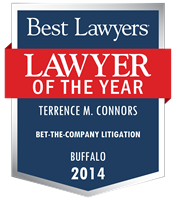 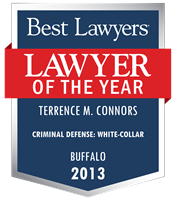 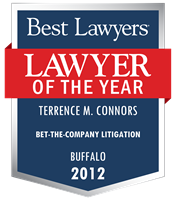 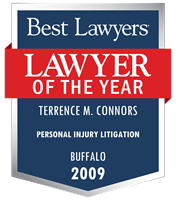 Terrence M. Connors has been recognized by his peers as one of the pre-eminent trial attorneys in the state. For the past seven years, he has been ranked as the number one lawyer in all upstate New York by Super Lawyers magazine. This year, the Erie County Bar Association named him Lawyer of the Year and, in 2006, the New York State Bar Association awarded him the prestigious Attorney Professionalism Award.

He is a fellow of the American College of Trial Lawyers. Membership in that organization is by invitation only and limited to one percent of the lawyers in each state. Mr. Connors is also a Fellow of the International Academy of Trial Lawyers. Membership in that organization is also by invitation and limited to a total of 500 trial lawyers in the United States. He is listed in The Best Lawyers In America® in seven separate categories: Personal Injury, Commercial Litigation, Legal Malpractice, Medical Malpractice, Bet the Company Litigation, Criminal Law, and White Collar and Non-White Collar.

Terry has always been an aggressive and proactive advocate. He started his career at one of Buffalo's largest law firms, quickly demonstrating his abilities as he was elected managing partner at the young age of 35. But Terry came to see that the big firm structure was hindering his ability to respond quickly and decisively to his clients’ needs. He had a vision of building a leaner, more efficient firm to improve the work he could do for his clients. His vision was to form a litigation boutique – a compact firm composed of the best and brightest litigators, freed from large firm constraints, and devoted entirely to providing litigation services. CONNORS LLP represents the realization of that vision – one that Terry continues to shape and direct.