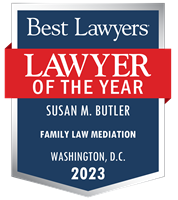 Susan Butler's practice has focused in the area of domestic relations and family law since she began her practice in 1992. Since 1996, her primary concentration has been in the court systems of Northern Virginia. She is a Certified Mediator for Circuit Court Family Cases and a fellow of the American Academy of Matrimonial Lawyers.

While she has brought the majority of her cases to closure without the necessity of contested court intervention, when it is not possible to reach an amicable resolution of a matter Ms. Butler has extensive experience in litigation of equitable distribution, custody, support and other family law issues in Northern Virginia court systems. Moreover, she has written appellate briefs and has argued cases before the Virginia Court of Appeals. She serves as a Neutral Case Evaluator and Conciliator for the Circuit Court of Fairfax County.

Ms. Butler is a graduate of Mount Holyoke College in South Hadley, Massachusetts and of The Catholic University of America Columbus School of Law. She is admitted to practice law in Virginia, the District of Columbia, Maryland, Connecticut, and before the United States Supreme Court. She is a member of the Virginia and Fairfax Bar Association.