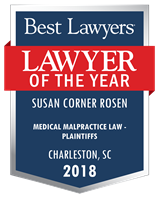 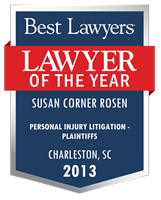 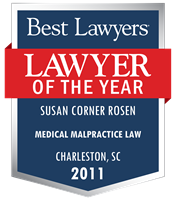 Susan Rosen has been listed in BEST LAWYERS for ten years. She is an experienced trial attorney who has represented both plaintiffs and defendants in a variety of cases with an emphasis on plaintiff medical malpractice and personal injury litigation. She has represented numerous people in medical malpractice claims and recently won one of the largest medical malpractice verdicts in the state - a $7 million verdict awarded by a Greenville County jury. Her prosecution of a civil murder case in a federal court in Atlanta gained national attention in 1994 and was reported on national television. She has represented clients in a variety of matters including wrongful death claims, unfair trade practices, products liability claims, medical malpractice claims, commercial disputes, and an extensive number of employment suits. She is a member of the American Board of Trial Advocates (ABOTA), where she served as the President of the Charleston Chapter. Ms. Rosen is also a member of the MultiMillion Dollar Advocates Forum and has been selected for inclusion in the South Carolina Super Lawyers magazine for many years. Ms. Rosen is also a Circuit Court Mediator, certified by the South Carolina Supreme Court. She was honored with the Leadership in the Law Award by South Carolina Lawyers Weekly in 2012. Ms. Rosen has been published in numerous legal publications. She authored the topic, Accountants, which was published in SOUTH CAROLINA JURISPRUDENCE, and co-authored the topic, Fraud, also published in that multi-volume treatise. Additionally, she co-authored an article entitled "Controlling Person Liability for Motor Vehicle Dealer Violations of the South Carolina Motor Vehicle Unfair Trade Practices Act: A Proposal for Reform," 47 S.C.L. REV. 349 (Winter 1996). She has lectured at legal education seminars for the South Carolina Bar, Charleston County Bar, ABOTA and the South Carolina Trial Lawyers Associations and has received an AV rating - the highest professional rating in the MARTINDALE-HUBBELL LAW DIRECTORY. She also served as an Adjunct Assistant Professor at the Medical University of South Carolina from 1985 through 1998. Ms. Rosen is admitted to practice in Massachusetts, Rhode Island, and South Carolina and is admitted to practice before the United States Supreme Court, the United States Courts of Appeal for the Fourth, Eleventh, and Federal Circuits, and the United States District Courts for the Districts of South Carolina and Rhode Island. She is a member of the Massachusetts, Rhode Island, South Carolina and Charleston County Bar Associations, the American Bar Association (Litigation and Labor & Employment Law Sections), the South Carolina Women Lawyers Association, the South Carolina Trial Lawyers Association, and the American Association for Justice (President's Club, Co-Chair Ethics Committee, State Liaison to Women Trial Lawyers Caucus, Professional Malpractice Section and Birth Trauma Litigation Group). She served as Chairperson of the Charleston County Bar Association's Continuing Legal Education Committee from 1989 until 1991 and again in 1995 until 1996 and served on its Executive Committee from 1990 until 1992 and 2003-2004.Ms. Rosen also served on the South Carolina Bar = s Task Force on Civil Justice and the South Carolina Task Force on Courts (2006-2007). Ms. Rosen earned a Bachelor of Arts degree in English from Cornell University and graduated cum laude from Suffolk University Law School. She served as Special Assistant Attorney General for the Commonwealth of Massachusetts from 1979 until 1980 and as associate and then General Counsel to Cranston Print Works Company, a textile printing company with corporate offices in New York City and Rhode Island. Personal Information Ms. Rosen was born in Norwalk, Connecticut, and was valedictorian of her high school class of approximately 700 students. She played competitive golf and tennis and was a member of the varsity ice hockey team at Cornell University. Active in civic affairs, Ms. Rosen has served for many years on the Board of Directors of the Hollings Cancer Center, the Board of Directors of the Charleston Neighborhood Legal Assistance, Inc. and Pro Bono Legal Services, Inc. She formerly served as President of the Charleston Civic Ballet and on the Board of Directors of the Carolina Lowcountry Chapter of Girl Scouts of America, Inc., My Sister's House, Inc., Charleston Theatreworks, and served as the Chairperson for the Hollings Cancer Center Citizens Advisory Board from 1996-2002.She served on the Long Range Planning Committee for The Preservation Society of Charleston. Additionally, she served on the Board of Directors of the Charleston Affiliate of the Susan G. Komen Breast Cancer Foundation, was the year 2000 Chairperson for the Komen Charleston Race for the Cure, and was Volunteer of the year in 2001. She also received the Tribute to Women in Industry Award in 1994. Susan and her husband, Robert live in the downtown historic district of the City of Charleston. Their three adult children live in NYC, but come home often!

It has been my honor and a privilege to represent many clients over the years. Each matter has been of great importance to the client, and therefore, to me. While some cases may seem more significant to others and to society, each and every case has been significant in its own right.