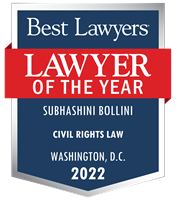 Subha Bollini represents employees with claims of employment discrimination and retaliation claims under federal, state and local law. She has litigated claims against employers of varying sizes, from small businesses to local, state, and federal agencies, to Fortune 50 corporations. In addition to representing employees in claims of discrimination based on age, race, and sex, she has litigated complex whistleblowing claims involving financial reporting, shareholder fraud, and industrial safety.

Ms. Bollini is President of the Metropolitan Washington Employment Lawyers Association (MWELA), a voluntary bar association of hundreds of attorneys who routinely represent employees in workplace disputes and works to advance the rights of employees, and she has served as a MWELA board member since 2011. Ms. Bollini is also an active member of the National Employment Lawyers Association (NELA), the nation’s only national bar association dedicated to the representation of employees and advancement of employee rights, and serves as NELA’s Affiliate Relations Committee representative for the Fourth Circuit and the District of Columbia, as well as Co-Chair of NELA’s Annual Convention Committee. She is also a member of the Women’s Bar Association, the South Asian Bar Association, and Washington Area Lawyers for the Arts. Ms. Bollini was selected by her peers for recognition in 2013, 2014, 2015, and 2016 as a Rising Star in Employment Law in Super Lawyers magazine.

Before practicing law, Ms. Bollini worked in communications for a presidential campaign, served as a legislative assistant for foreign affairs, trade, and defense for a member of the U.S. House of Representatives, and performed as a solo violinist, chamber musician, and orchestra member, and with major recording artists in the U.S. and abroad.

Ms. Bollini earned her Juris Doctor from the American University Washington College of Law and earned a Bachelor’s Degree in Music Performance and Biology from The University of Southern California, where she was admitted as a Dean’s Scholar in the Thematic Option honors program. She completed additional graduate coursework at the University of Chicago and Georgetown University, where she studied International Conflict Resolution. Ms. Bollini is a member of the state and federal bars of the District of Columbia and Maryland, as well as the U.S. Court of Appeals for the Fourth Circuit and the District of Colorado.

Subhashini Bollini is honored as 2022 "Lawyer of the Year" in Civil Rights Law for Washington, D.C. 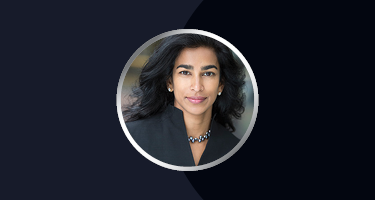