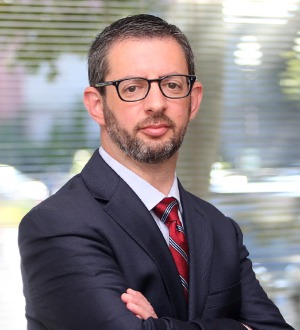 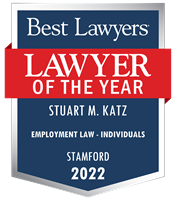 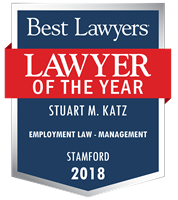 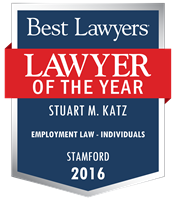 Stuart M. Katz is a principal of Cohen and Wolf and Chair of the firm's Litigation Group. He is also a member of the firm's Employment & Labor and Physicians' Practices Groups. Mr. Katz is highlighted in Chambers USA (2017) for the "superb quality of his counsel and representation." He represents employers of all sizes in defending discrimination and harassment suits and litigating restrictive covenant, breach of contract, business tort and wage claims. Mr. Katz also represents professionals and executives in matters relating to their employment. He has been named "Lawyer of the Year" for Employment Law (Management) (2018) and for Employment Law (Individuals) (2016) by the Best Lawyers in America, for the Stamford, Connecticut metro area. He routinely provides guidance to employers and employees regarding personnel policies, handbooks and employee discipline. In addition, Mr. Katz has extensive experience in matters involving disputes between owners of closely-held businesses, and in litigating other complex business disputes. He practices in both the state and federal courts, often acting as local counsel for out-of-state law firms and companies, and handles matters before the Connecticut Commission on Human Rights and Opportunities, the Department of Labor and other administrative agencies.

Mr. Katz has been recognized as a leading lawyer in Connecticut in the area of Labor & Employment Law, by Chambers USA - America's Leading Lawyers for Business (since 2008) and is listed in Best Lawyers in America (2013-2019) for his work in the areas of Litigation (Labor & Employment) and Employment Law (Individuals and Management). In addition, Mr. Katz has been recognized by Super Lawyers since 2009 for his work in the area of Employee Litigation: Defense. He is listed as one of Super Lawyers"Top 10 Connecticut Lawyers" (2013-2015) and "Top 50 Connecticut Lawyers" (2012-2018). Benchmark Litigation, The Definitive Guide to America’s Leading Litigation Firms & Attorneys, named Mr. Katz a "Local Litigation Star" in Connecticut (2011-2019), and a "Labor & Employment Star-Northeast" (2019), in areas including Employment and General Commercial Litigation. Mr. Katz often lectures on employment law topics and has authored numerous articles in this area.

Active in the community, Mr. Katz currently serves on the boards of directors of Camp Ramah in New England and Ezra Academy. He also served for many years as an associate national commissioner and on the regional executive committee of the Anti-Defamation League and is a past-President of Temple Beth Sholom in Hamden.