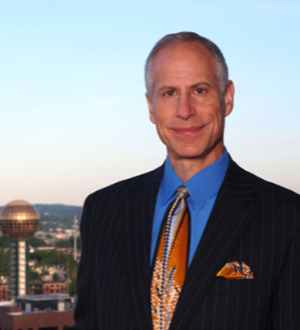 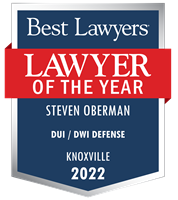 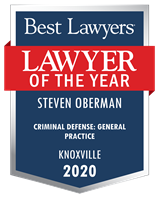 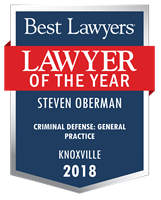 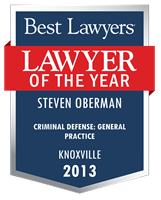 Steve is the managing partner of The Oberman & Rice Law Firm, practicing General criminal defense and DUI defense law primarily in the East Tennessee region of the state. Since 1980, Steve has successfully represented thousands of clients charged with DUI and Vehicular Homicide in addition to representing those accused of other serious crimes such as bank fraud, attempted murder, various drug crimes, embezzlement, and other white collar offenses.

Designated a Fulbright Scholar in 2019, Steve was honored by teaching as a visiting professor at The University of Latvia in Riga, Latvia where he taught two classes: American Criminal Law and American Trial Advocacy. During his term in Latvia, Steve also lectured at Mykolas Romeris University, one of Lithuania's largest universities, and the Czech Republic Police Academy in Prague. Steve has served as an adjunct professor at the University of Tennessee Law School since 1993 and has received a number of prestigious awards for his faculty contributions. Mr. Oberman is a popular speaker at seminars throughout the world on topics of trial techniques and DUI defenses. He has lectured to other lawyers, judges, and law enforcement officers on hundreds of occasions in 29 states and five foreign countries.

Mr. Oberman is the author of DUI: The Crimes & Consequences in Tennessee (Thomson-West Publishing, updated annually since first published in 1991); and since 2003, is the co-author of Drunk Driving Defense, (Wolters-Kluwer/Aspen Publishing) with Lawrence Taylor of Long Beach, California. Both texts are widely relied upon by judges, prosecutors and defense lawyers.

Additionally, Mr. Oberman has been chair or co-chair of the National Association of Criminal Defense Lawyers' DUI Committee since 1995 and is a frequent contributor to The Champion, its official publication. Mr. Oberman is one of only a few lawyers in the nation who have been certified by the National Highway Traffic Safety Administration (NHTSA) to administer the Standardized Field Sobriety Tests. He was also the first lawyer in Tennessee to be Board Certified as a DUI Defense Specialist by the National College for DUI Defense.

Steve has been named to Tennessee’s Best Lawyers List annually since the inception of the list in 2004. It described him as: “[the] Godfather statewide in the area of DUI”; “Brilliant lawyer, great teacher”; and “Well-regarded trial attorney with ‘professorial’ demeanor. . . .”. He has also been honored as Lawyer of the Year on multiple occasions in the areas of Criminal Defense: General Practice, and in DUI Defense in addition to being named one of the “Best Lawyers in America” by the publication of the same name; a “Top 100 Trial Lawyer” by the American Trial Lawyers Association; and a “Super Lawyer” by Mid-South Super Lawyers magazine. Moreover, "U.S. News and World Report" designated Oberman & Rice as a "Tier 1 Best Law Firm" in Tennessee for DUI Defense and Criminal Defense. Mr. Oberman also maintains the highest rating from the renowned Martindale-Hubbell™ and AVVO rating systems.