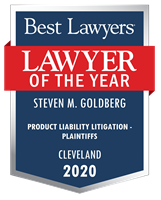 Mr. Goldberg was recently unanimously voted into the American Board of Trial Advocates. The American Board of Trial Advocates (ABOTA) is a prestigious national association of the most respected and experienced trial lawyers and judges. Membership is by invitation only and is highly selective. It is limited to only those attorneys who have attained the requisite level of jury trial experience. Steven is also a member of the Million Dollar Advocates Forum®, The Top Trial Lawyers in America® (which includes the Multi-Million Dollar Advocates Forum), one of the most prestigious groups of trial lawyers in the United States. Membership is limited to attorneys who have won million and multi-million dollar verdicts and settlements. Less than 1% of U.S. lawyers are members. For 5 consecutive years, Goldberg Legal Co. LPA has been ranked in the U.S. News – Best Lawyers® “Best Law Firms” list regionally (Cleveland) in 2 practice areas including, Medical Malpractice Law – Plaintiffs and Product Liability - Plaintiffs. In addition to being named in Best Lawyers every year since 2018, Attorney Steven M. Goldberg also received Best Lawyers’ highest “Lawyer of the Year” distinction in 2020.

The legal system is enough of a minefield to begin with. Add in corporate bullies, unqualified doctors, citizens who hurt other citizens, and defense lawyers – all of whom stand to lose money if you win justice – and all of a sudden you have a nightmare situation.

The good news is you are not alone, and you can get legal representation that is equal to the gravity of your case.

"Steve represented me in a very complex business legal matter. He's a fantastic attorney; knowledgeable, smart and very attentive. I highly recommend him for a multitude of reasons."

"My family has known attorney Steven Goldberg for a number of years. He has assisted us on a professional level in medical malpractice, civil litigation, and has advised us on other matters on several occasions. It is without hesitation that I say his professionalism, knowledge, and caring attitude are above and beyond any other legal experience I have had. I trust him implicitly as well as his staff and would refer any and all who ask to him for his services."

"Attorney Goldberg, and his legal team Christina and Maureen, deliver superb services. The whole team is very personable, and I always felt welcomed and at ease at their office. When I met with Mr. Goldberg to discuss my case, his priority was to send me to medical experts to help me recover from the injury I sustained. He is knowledgeable and very educated about medical issues, which showed me how compassionate he is. I’m grateful for him because, without his help, I may not have found a treatment for my condition. He is thorough and always available to answer all my questions and concerns. His integrity is indisputable. I had a positive experience with Goldberg Legal office, and I highly recommend them."