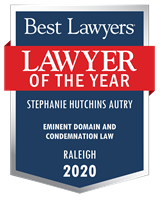 Stephanie Hutchins Autry has been a trial lawyer since 1987 and has focused her practice on eminent domain since 2000. Before joining Cranfill Sumner & Hartzog as a partner in 1995, Stephanie was a partner in the Raleigh office of an international law firm. Stephanie’s career has included dozens of successful jury and bench trials and reported appellate decisions.

For the last 15 years, Stephanie has concentrated her practice exclusively in the area of eminent domain, representing property owners in land condemnation matters throughout North Carolina. She has tried over a dozen multi-million dollar land condemnation cases to favorable jury verdicts, resulting in awards greatly in excess of the condemnor’s estimated just compensation. Stephanie also has an exceptional record of resolution through settlement. Stephanie, along with her husband and law partner, George Autry, has won the two largest land condemnation judgments in NCDOT history. Stephanie's track record includes trial and settlements of virtually every type of eminent domain case, including condemnations of shopping centers, gas stations, hotels, mining and manufacturing facilities, golf courses and country clubs, office and residential condominiums, livestock farms and historical properties, to name a few. Stephanie regularly represents clients against the North Carolina Department of Transportation, the City of Raleigh, the City of Charlotte, the Triangle Transit Authority, the North Carolina Turnpike Authority, and Duke Energy Progress.

Stephanie has been admitted to the Supreme Court of the United States and is a member of the North Carolina Advocates for Justice. She was recently appointed to the Brigham-Kanner Property Rights Conference Advisory Board.

Negotiated the largest eminent domain settlement ever paid by the NC Department of Transportation, $22,500,000, for the partial taking of a shopping center on Independence Blvd. in Charlotte, North Carolina.

Represented a property owner in obtaining nearly $16,000,000 in compensation for the taking of part of a family farm in Fayetteville, NC. At the time, this was the largest settlement in the history of the NCDOT. As a part of the DOT's project, an interchange was going to be build on the remaining property, which would give the property owner ownership of property on all four quadrants of the interchange. The settlement included favorable development concessions for the remaining land.

Earned recognition by North Carolina Lawyers Weekly for obtaining three out of the twenty-five largest verdicts or settlements in all of North Carolina during 2013. Of the top twenty-five cases, including all types of civil cases, five were condemnation cases. Three of those, including the largest two, were cases handled by Stephanie, with her husband and law partner, George Autry, handled three out of five condemnation cases that made the top twenty-five.

In a case of first impression, established the right of townhome owners to compensation for damage to their units when common area is taken. Stephanie won a victory for her clients in the trial court, then fought the DOT's appeal to the North Carolina Court of Appeals, where the townhome owners again won. The Supreme court of North Carolina denied the DOT's petition for discretionary review. The North Carolina Lawyers Weekly recognized the case as one of the most important legal opinions of the year.