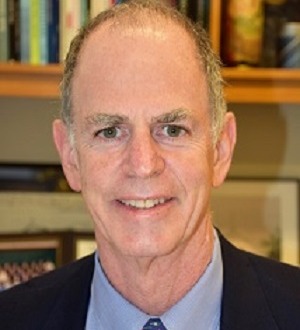 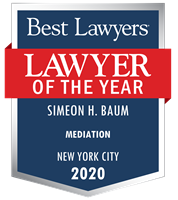 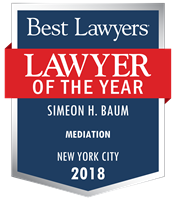 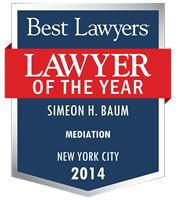 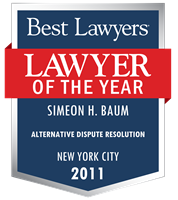 Simeon H. Baum, President of Resolve Mediation Services, Inc., has successfully mediated nearly 2,000 disputes. He has been active since 1992 as a neutral in dispute resolution, assuming the roles of mediator, neutral evaluator and arbitrator in a variety of cases, including the highly publicized mediation of the Studio Daniel Libeskind-Silverstein Properties dispute over architectural fees relating to the redevelopment of the World Trade Center site, Trump’s $ 1 billion suit over the West Side Hudson River development, and Archie Comics’ shareholder/CEO dispute. He was selected for New York Magazine’s 2005 - 2021 “Best Lawyers” and “New York Super Lawyers” listings for ADR, and Best Lawyers’ “Lawyer of the Year” for ADR in New York for 2011, 2014, 2018, 2020, and 2021; and in the International Who’s Who of Commercial Mediation Lawyers 2012-2021.

Mr. Baum has shared his enthusiasm for ADR through teaching, training, extensive writing and public speaking. He has taught ADR at NYU's School of Continuing and Professional Development, and he teaches Negotiation, and Processes of Dispute Resolution (focusing on Negotiation, Mediation and Arbitration) at the Benjamin N. Cardozo School of Law. He developed and conducts 3-day programs training mediators for the Commercial Division, Supreme Court, New York, Queens, and Westchester Counties. He has been a panelist, presenter and facilitator for numerous programs on mediation, arbitration, and ADR for Judges, attorneys, and other professionals. Mr. Baum is a graduate of Colgate University and the Fordham University School of Law.