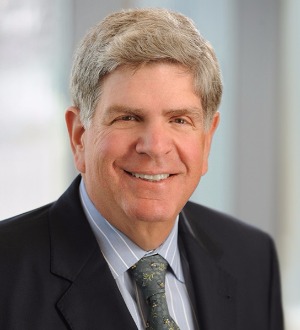 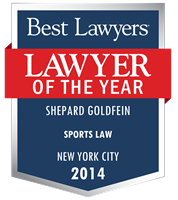 Mr. Goldfein successfully represented the NHL in connection with the efforts of a prospective buyer to purchase the Phoenix Coyotes and relocate the team to Canada though bankruptcy proceedings without submitting to league approval processes governing transfers of ownership and relocation. He also represents the NHL in connection with a purported antitrust class action challenging the exclusive broadcast territories of the NHL member clubs. Mr. Goldfein also regularly has counseled the NHL on a variety of its business practices and has served as counsel to the commissioner on a variety of matters brought before the commissioner for arbitration.

Mr. Goldfein obtained a jury verdict in favor of the National Football League in a case brought by Victor Kiam in connection with the sale of the New England Patriots. After six weeks of jury trial, Mr. Goldfein also secured a directed verdict for the NFL in an antitrust action brought by the St. Louis Convention and Visitors Commission in connection with the relocation of the Rams franchise from Anaheim to St. Louis. In the highly publicized antitrust action brought by the United States Football League against the NFL, Mr. Goldfein served as one of the trial counsel who successfully defended the NFL and its member clubs against claims of monopolization and other antitrust violations. He also defended the NFL in the numerous lawsuits filed by NFL players challenging NFL player employment rules, including the case brought by Freeman McNeil. Mr. Goldfein also successfully defended the NFL in the case brought against it by former New England Patriots owner William Sullivan, who challenged the validity of the League’s public ownership policy. Mr. Goldfein also has represented the National Basketball Association and the Arena Football League.

Mr. Goldfein also has litigated many treble damages class action price-fixing cases. He has defended such clients as Cemex, Christie’s plc, Christie’s Inc., the American Stock Exchange, International Paper Co., NewYork-Presbyterian Hospital, Merrill Lynch, Pierce, Fenner & Smith, and Morgan Stanley in such litigations, as well as a variety of clients in criminal and civil investigations conducted by the antitrust division of the Department of Justice.

Mr. Goldfein has worked on mass disaster criminal investigations and related civil litigations. He successfully defended Great Adventure, Inc. and its parent company, Six Flags Corporation, against charges of aggravated manslaughter arising out of the tragic deaths that resulted from a fire at Great Adventure Amusement Park, and represented the New York State Urban Development Corporation in a criminal investigation and wrongful death litigation arising out of a fire at Schomburg Plaza, a high-rise residential complex in Manhattan. In addition, Mr. Goldfein served as lead trial counsel for Bally Manufacturing Corporation in its products liability defense of the wrongful death and personal injury actions that arose out of the San Juan Dupont Plaza Hotel fire in Puerto Rico. He also successfully represented the landlords of the Happy Land Social Club, where 87 people died in an arson fire, with regard to a felony manslaughter investigation.

Mr. Goldfein writes a monthly column for the New York Law Journal focusing on antitrust issues. He was included among The Hockey News’ 2012 “People of Power & Influence” list. Mr. Goldfein repeatedly has been selected for inclusion in Chambers USA: America’s Leading Lawyers for Business, The International Who’s Who of Competition Lawyers and The Best Lawyers in America. He also was named “Best Lawyers’ 2014 New York City Sports Lawyer of the Year.”