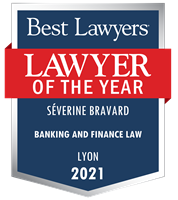 Séverine BRAVARD graduated from the University of DIJON, where she gained a DESS postgraduate qualification in Taxation, Accounting and Business Law. She also has an International Diploma in European Tax Law from the College of EUROPE.

She first practiced for 2½ years as a tax lawyer in the law firms ARTHUR ANDERSEN and DELOITTE & TOUCHE. Wishing to move into corporate law and equity financing, she joined the Corporate Law – Mergers and Acquisitions Department of DELSOL Avocats in April 2001, first in LYON, then in PARIS, then again in LYON.

22 The Best Lawyers in France™ awards

2 Best Lawyers: Ones to Watch in France awards