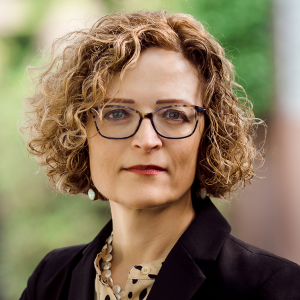 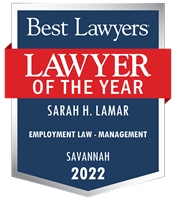 Sarah Lamar is a partner in the Firm’s Savannah office and practices in the area of employment law. Sarah has experience representing employers in employment litigation in state and federal courts regarding discrimination and employment laws such as Title VII, the Age Discrimination in Employment Act, Americans with Disabilities Act, Family and Medical Leave Act, and Fair Labor Standards Act, among others. She also represents employers in breach of contract actions, including non-competes and tort claims, and in agency investigations brought by the U.S. and Georgia Departments of Labor, the EEOC, OFCCP, and U.S. ICE. She conducts in-house training for employers and advises clients on a variety of human resource issues, including their federal affirmative action and immigration law obligations.

Sarah is admitted to the bars of Georgia and the District of Columbia. She is also admitted to practice in the U.S. Court of Appeals for the Eleventh Circuit and the U.S. District Courts for the Southern, Middle, and Northern Districts of Georgia; the Northern District of Florida; and the District of Maryland. She is a member of the American Bar Association and the Savannah Bar Association. She was previously chair of ALFA International, a global legal networking organization. She also serves on ALFA International’s Employment Practice Group Steering Committee.

Sarah is co-author of the article “Interest Arbitration: Public and Private Sector,” published in the Wiley Employment Law Update by John Wiley & Sons (1994), and is a contributing author to the Employment Discrimination Law 1998 and 2000 Supplements. She is also a past member of the editorial board of the Georgia Bar Journal and has given numerous seminar presentations to businesses and human resource professionals on employment law, including Title VII, harassment, ADA, ADEA, reductions-in-force, FLSA, federal and state leave laws, privacy, defamation, workplace violence, and immigration law.

She received her B.A. in History from Yale University in 1988 and her J.D. from Emory University in 1991. At Emory, she served as senior notes and comment editor for the Emory International Law Review. Following law school, Sarah was a law clerk from 1991 to 1992 for the Honorable Richard B. Kellam, Judge, U.S. District Court, Eastern District of Virginia.

"Sarah Lamar is bright, genuine, and extremely capable. She is an excellent attorney and a very active community citizen as well."

"My greatest fear in business is what I do not know. Sarah Lamar provides a sound knowledge base for issues as they arise. She also is proactive in addressing practices and policies before they become issues. I value her input."

"Sarah Lamar is bright, genuine, and extremely capable. She is an excellent attorney and a very active community citizen as well."

"Sarah Lamar is wonderful in all areas. I hope to never need anyone else!"

"Sarah Lamar is most knowledgeable in her field. In my opinion, what makes her stand out, though, is her ability to quickly filter through information, formulate a viable plan of action and thoroughly but succinctly outline the options. While she is very personable outside of work, Sarah is conscious of the clock and keeps all involved on track/topic during phone conferences and/or meetings. I'm very thankful for our business relationship as she has made my work much less taxing/stressful. I'm even more thrilled that she is involved in a Women's Initiative in Savannah so I could have the opportunity to get to know her outside of work. Sarah is a true pleasure to know in all walks of life."