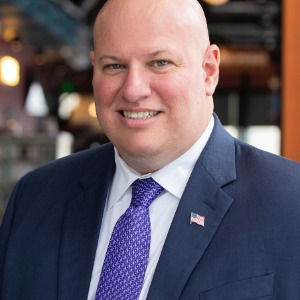 Samuel C. Hall, Jr. is the Managing Partner of Crivello Carlson, S.C. and is a member of the firm’s Board of Directors. He received his bachelor’s degree and law degree from Marquette University. During law school, Sam was a St. Thomas More Scholar for three years and was a member of the Marquette Sports Law Review. His principal practice focuses on civil rights litigation, products liability and appellate practice. In addition to his litigation practice, Sam is also a certified mediator, concentrating on complex disputes between parties.

In 2019, Sam was invited to the White House and considered for appointment as a U.S. District Court judge and he received bipartisan support for nomination to the federal judiciary by both Senator Tammy Baldwin and Senator Ron Johnson. Sam has been named to the Best Lawyers in America and he received the top “AV-Preeminent” peer and judicial ratings by Martindale-Hubbell. He has also been selected for the Wisconsin Super Lawyers list several times for his civil rights defense and appellate work. Based on his experience in defending law enforcement officers, Sam has been a keynote speaker and lecturer for many law enforcement organizations and was also an adjunct instructor for a Master’s level course offered by the University of Wisconsin for law enforcement command staff.

In his free time, Sam moonlights as a thoroughbred racehorse owner. Sam’s horses have successfully raced throughout the United States, Canada and Europe. Based on his legal work and his work in thoroughbred horseracing, Sam has been profiled in Marquis Who’s Who in America. Additionally, Sam was recognized by the Milwaukee Business Journal with its 40 Under 40 Award.