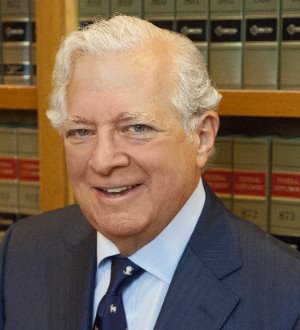 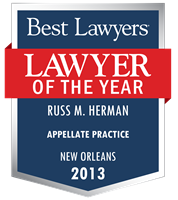 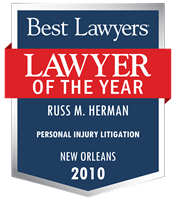 Russ M. Herman is a Senior Partner of Herman, Herman & Katz, L.L.C. He graduated from Tulane University with a B.A. Degree and L.L.B. in 1966. In 1977, he was chosen “Outstanding Trial Lawyer” by the Louisiana Trial Lawyers Association, and was LTLA President in 1980-81.

He has authored over 200 articles, papers and books in various aspects of Civil Trial Practice and has been published in various works including Am Jur; Trials; Shepard’s/McGraw Hill; The National Business Institute; Trial Magazine; The Forum; and Personal Injury Annual by Matthew Bender.

Mr. Herman is a principal faculty member of The Professional Education Group (P.E.G. ~ Minnesota, MN) and has served on the faculties of the Practicing Law Institute and The National College of Trial Advocacy. He has lectured at Tulane, L.S.U., Loyola, Georgetown, Hastings and other law schools.

Mr. Herman served as President of the (ATLA) Association of Trial Lawyers of America (1989-1990); President of the Civil Justice Foundation (1987-1988); and President of the Roscoe Pound Foundation (1991-1993). He is a Diplomate of the American Board of Professional Liability attorneys; a Diplomate of the National College of Advocacy, a Fellow and Director of the International Academy of Trial Lawyers, a member of the American Board of Trial Advocates (ABOTA),a Fellow of the International Society of Barristers, and a Barrister of the American College of Barristers. In July of 2001, Mr. Herman was selected for The Leonard M. Ring Champion of Justice Award, which is the highest honor bestowed by ATLA. He has also received the ATLA Lifetime Achievement Award (1999) and the Joe Tonahill Award (1998); Pursuit of Justice Award (American Bar Association Tort Trial & Insurance Practice Section (TIPS) 2005); and City Business’ Top 100 Leaders in Law for 2005 and 2006.

Mr. Herman has been selected for listing by Naifeh and Smith in their book “Best Lawyers in America” in Personal Injury, Maritime, Complex Litigation and Appellate Trial Practice areas. He is AV Rated in Martindale-Hubbell.

He is the author and performer of ATLA’s best selling, 6-Volume Video Trial Practice Series, “Courtroom Persuasion: Art, Drama & Science” and a 443-page book by the same title published by West Group, Clark Boardman Thomson and ATLA Press and is the author for West Group’s two-volume series Louisiana Personal Injury. Current CLE programs by Mr. Herman: The Cutting Edge in Courtroom Persuasion and Storytelling and the Model for Winning at Trial are produced by The Professional Education Group (P.E.G.).

The National Law Journal named Mr. Herman as one of Louisiana’s top ten litigators, and the American Law Journal highlighted Mr. Herman in its June 1999 issue. Fortune Magazine featured his litigation accomplishments in the July 3, 2000 issue.

In 2004, a jury returned a $591,000,000 verdict in Scott v American Tobacco, et al. (96-8461, Orleans Parish, Civil District Court). Mr. Herman was lead trial counsel in this case. Mr. Herman was the Court Appointed Liaison and Lead Counsel in In Re Propulsid: MDL 1355 case. He is the Liaison Counsel and Member of PSC Executive Committee In Re Vioxx: MDL1657.

Russ Herman was named 2007 Lawyer of the Year by Lawyers USA on December 19, 2007, citing his role as the lead negotiator for Plaintiffs in reaching the recent $4.85 Billion Settlement with Merck in the Vioxx Litigation.

Russ Herman and the Firm were retained in 2008 as Special Counsel to the Council of the City of New Orleans.

From 2009 to date, Russ Herman has been designated in Louisiana Super Lawyers. In 2010, he was admitted to the trial lawyers Hall of Fame by the American Trial Lawyers with President John Adams, Clarence Darrow, Fred Levin, Morris Dees and others.

"Russ Herman is the top lawyer in the firm. He represented me in my first construction case and won. We have worked together for many years since then."