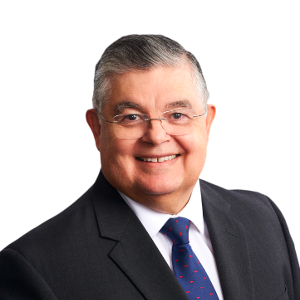 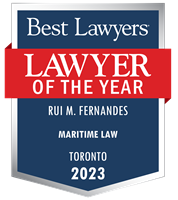 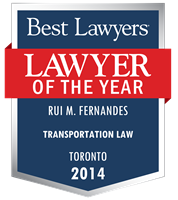 Mr. Fernandes practices transportation law (aviation, marine, trucking, rail, freight forwarding, logistics and warehousing). He also conducts mediations and arbitrations, holding certificates from the University of Windsor for its ADR Workshop and for its Advanced ADR Workshop and from Pepperdine University. Mr. Fernandes has appeared before the courts of Ontario, British Columbia, Alberta, Nova Scotia, the Federal Court of Canada, the Federal Court of Appeal and the Supreme Court of Canada. He is the author of numerous articles and five texts on transportation and insurance law, including the three volume “Transportation Law” published by Aerospark Press.

25 The Best Lawyers in Canada™ awards

Rui holds certificates from the University of Windsor for its ADR Workshop and for its Advanced ADR Workshop and Pepperdine University for its STAR program (Systematic Approach to Mediation Strategies). He is a qualified arbitrator and obtained his Q. Arb. designation in 2019 and his FCIArb in 2020.