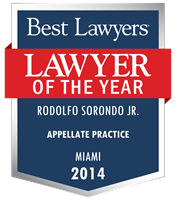 Rodolfo Sorondo, Jr., leader of Holland & Knight's appellate practice group in the Miami office, is a partner in the firm. He focuses his practice primarily on state and federal appeals and trial support, specializing in all types of litigation. He also serves as a mediator, special master and arbitrator in state and federal courts.

Mr. Sorondo began his career as a trial lawyer and tried numerous jury and bench trials until his appointment to Florida's Judiciary. In 1992, he was appointed by then Governor Lawton Chiles to the Circuit Court of Florida’s Eleventh Judicial Circuit in Miami-Dade County. He served that court with distinction through January of 1997, at which time he was elevated by Governor Chiles to Florida's Third District Court of Appeal where he again served with distinction through 2002. He joined Holland & Knight on October 1, 2002.

In addition to his judicial duties, during his tenure on the bench Mr. Sorondo dedicated a considerable amount of time to teaching. He has served as an adjunct professor at the University of Miami’s College of Law teaching litigation skills from 1995 to the present. He has also served as a faculty member for the College of Advanced Judicial Studies, and the Conferences of Circuit and County Judges where he has lectured on issues related to jury selection, dismissals for fraud on the court, Florida Evidence Code Sections 404(2)(a) [the Williams Rule], and 90.803(23) [child hearsay]. Finally, he has served as an instructor at the National College of District Attorneys in Columbia, South Carolina on the subject of appellate advocacy, and the National Institute of Trial Advocacy in Boulder, Colorado.

Since his return to private practice, Mr. Sorondo has been invited back to teach at the Conference of Circuit Judges and has also lectured to the Dade County Defense Bar Association, the Miami-Dade County State Attorney's Office and to private law firms.

421 The Best Lawyers in America® awards