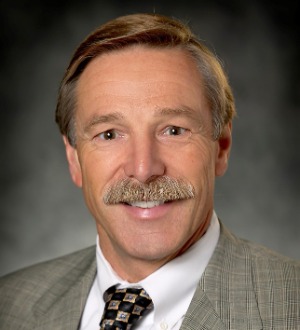 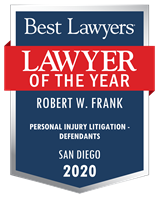 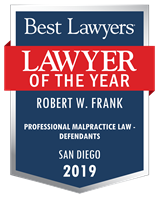 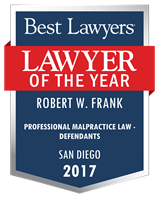 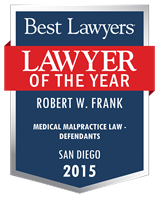 Robert Frank, Senior Trial Lawyer, joined Neil Dymott in 1980. He has been a shareholder in the law firm since 1988. Mr. Frank specializes in civil litigation defense trial work and administrative licensing hearings for various types of healthcare professionals, with an emphasis on medical, dental, chiropractic and nursing specialties. He also handles a variety of other general civil litigation including, professional liability, medical malpractice and administrative licensing matters as well as medical staff privilege issues.

Since joining Neil Dymott, Mr. Frank has tried over 60 cases to jury verdict in State and Federal Courts and has handled over 100 healthcare professional licensing matters, including numerous successful trials and appeals of those cases. He served as a Board member, President and Vice President of the San Diego Defense Lawyers from 1993 to 1997 and is an elected member of the American Board of Trial Advocates. Mr. Frank is past director of the San Diego County Barristers Club and currently is a faculty member of the San Diego Inn of Court College of Trial Advocacy.

The San Diego Superior Court has appointed Mr. Frank as an arbitrator in civil cases and he has served as a private mediator and arbitrator in other civil cases. Aside from practicing law, he is an avid surfer, enjoys golf and spending time with his children and friends.