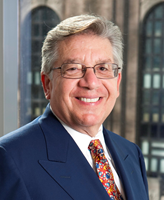 Kostelanetz & Fink, LLP
"Mr. Fink is a highly respected attorney in the profession. He has wide experience and can be relied on for outstanding work."

"There's no better attorney than Robert Fink. I'd recommend him without a moment's hesitation. Mr. Fink is as bright, realistic and talented an attorney as I've ever met, and a delight to work with."
Read More Client Comments

Robert S. Fink is one of the nation's most successful trial lawyers, and has a remarkable record of obtaining acquittals in the areas of civil and criminal tax and white collar criminal defense.  In addition, through his excellent negotiating skills, Mr. Fink has been able to favorably settle thousands of civil cases against government agencies.  He has also been able to convince government agents and attorneys to civilly resolve cases that were originally thought to be criminal in nature.

For more than twenty years, Mr. Fink has been an Adjunct Professor of Law at New York University Law School's Graduate Tax Program, teaching the course on Civil and Criminal Tax Penalties.  In addition, Mr. Fink was a Visiting Professor of United States tax law at the University of Peking in Beijing, China, and is a nationwide lecturer via government television, teaching civil and criminal tax procedures to attorneys and agents of the Department of Justice and the Internal Revenue Service.

Mr. Fink lectures frequently at tax and criminal symposia, and appears regularly as a commentator on radio, television, and in newspapers.

Mr. Fink also has served on the Advisory Committee to the Tax Division of the United States Department of Justice and was the Co-Chairman of the IRS Northeast Regional Bar Liaison.  He has testified as an expert witness on the Internal Revenue Service's investigative powers before subcommittees of both Houses of Congress and has testified before the New York State Assembly's Ways and Means Committee on tax legislation.

"Mr. Fink is a highly respected attorney in the profession. He has wide experience and can be relied on for outstanding work."

"There's no better attorney than Robert Fink. I'd recommend him without a moment's hesitation. Mr. Fink is as bright, realistic and talented an attorney as I've ever met, and a delight to work with."

"We found Bob Fink to be very professional and knowledgeable, as well as a lawyer who took the time to both listen to our concerns and respond to them immediately. He was a pleasure to work with and we definitely would recommend him."

Jury acquittal on all 36 counts.

Mr. Fink obtained a jury acquittal on all 36 counts for his client, an accountant, who prepared tax returns on the theory that wages were not taxable.  The case was a retrial of the same charges that earlier resulted in a hung jury.  Both the government and experts in the field called the result, "astonishing."

At trial, Mr. Fink won innocent spouse protection for the wife of "Mad Dog Beck" of Drexel Burnham fame.  Mr. Fink proved that his client had no reason to question hundreds of thousands of dollars in nonexistent charitable deductions.

Mr. Fink convinced a jury to acquit a major New York contractor accused of illegally paying bribes to six different building managers on the theory that his client was the victim of six different extortions.

Mr. Fink represented the head of KPMG's tax practice in the largest tax fraud prosecution in United States history, in which Mr. Fink obtained the dismissal of the indictment on the ground of prosecutorial misconduct.

Mr. Fink has represented hundreds of taxpayers who successfully

Mr. Fink achieved a court directed not guilty verdict after a five-week jury trial of the CFO of a healthcare provider criminally accused of healthcare fraud.

While picking a jury in the Southern District of New York, for the criminal tax trial of a major New York City real estate developer, Mr. Fink persuaded the government to dismiss the indictment by convincing the prosecutor that the government's essential witness, the taxpayer's accountant, was a liar
Add Comment
Your comment was saved successfully!
Thank you for your feedback.