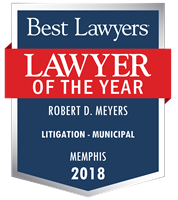 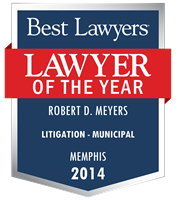 Robert D. Meyers is certified as a Civil Trial Specialist by the National Board of Trial Advocacy.

Mr. Meyers has a breadth of employment litigation experience. He has defended companies and individuals before courts in Tennessee, Mississippi, Arkansas, Alabama, Texas, Georgia, Louisiana, Indiana and Virginia. He has been instrumental in assisting clients in dealing with employee medical issues including ADA, FMLA and workers' compensation concerns. Mr. Meyers also has extensive experience representing public employers in claims brought under the Title VII, § 1981 and § 1983.

Mr. Meyers is Chairman of the Shelby County Election Commission and a Peer Reviewer for “America Votes! A Guide to Modern Election Law and Voting Rights,” Second Edition 2012 ABA Section of State and Local Government Law.

While in law school, Mr. Meyers was a member of the Tennessee Law Review and president of the Student Bar Association.