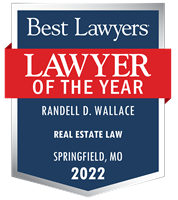 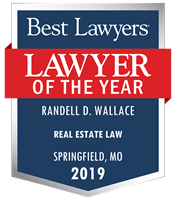 Mr. Wallace is the partner in charge of the firm’s Springfield, Missouri office. He counsels local, regional and national developers, lenders and institutions in real estate acquisition and divestiture, planning and zoning matters, economic development and redevelopment incentives, lending transactions, foreclosure, bankruptcy and workouts, leasing, and condominium formation and operation.

He also practices in mergers and acquisitions, corporate finance, securities, and economic development incentives. He has represented purchasers and sellers in merger and acquisition transactions in the technology, food and agribusiness, pharmaceutical, and manufacturing industries. He has also represented technology, security and financial companies in private placements of securities.

Mr. Wallace was named a finalist for the 2008 “Lawyer of the Year” by the Missouri Lawyers Weekly for his representation of the McQueary Bros. Drug Co. in its $190 million acquisition by McKesson Corp., the 18th ranked company on the Fortune 500 list. McQueary Bros., a family-owned company founded in 1924, was a regional distributor of pharmaceutical, health and beauty products to more than 400 independent pharmacies in seven states.

146 The Best Lawyers in America® awards

31 Best Lawyers: Ones to Watch® in America awards