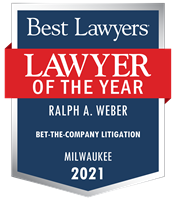 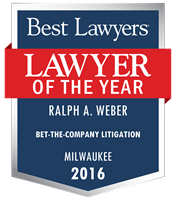 Mr. Weber has represented clients in several of Wisconsin’s highest profile lawsuits over the past several decades, and recently won a $50 million verdict after a five week jury trial. He also represents companies in cases nationwide. For example, Mr. Weber won a multi-million dollar award in Portland, Maine for a food company whose supplier caused a widespread foodborne illness outbreak. Mr. Weber has tried many lengthy jury and court trials. His appellate experience includes multiple oral arguments before the Wisconsin Supreme Court and intermediate appellate courts.

The prestigious international lawyer reference, Chambers Guide-USA, identifies Mr. Weber as a top commercial litigator. He also has been recognized by his peers through selection to Best Lawyers in America, Wisconsin Super Lawyers, and has been selected as a “Best of Class” service provider in the United States.

An Adjunct Professor at Marquette University Law School, he has taught Trial Advocacy for more than 15 years, and created a jury research and courtroom facility, the Trial Science Institute. In addition to speaking about litigation subjects, Mr. Weber co-edited a bestselling book, Dear Americans: Letters from the Desk of Ronald Reagan (Doubleday, 2003).

Mr. Weber serves on the Northwestern Mutual Board of Trustees. Mr. Weber founded and worked with several charitable and nonprofit groups, including the Marquette University National Alumni Board, the Marquette University College of Arts & Sciences Alumni Board, and the FC Milwaukee Soccer Club. He also served on the Board of Directors of the Wisconsin Conservatory of Music and the Board of Directors of Pius XI High School and chaired the Education Committee.