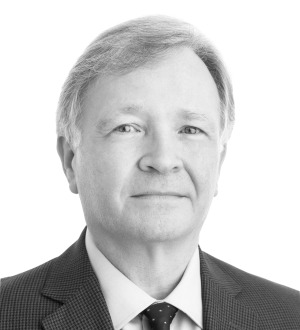 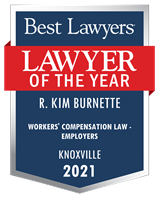 Kim Burnette is a partner with Arnett, Draper & Hagood, where his practice focuses on tort litigation, product liability, workers’ compensation, mediation, and insurance issues. Kim is an East Tennessee native who received his J.D. degree from the University of Tennessee College of Law in 1985, graduating with honors.

Upon graduation, he served a one year judicial clerkship with United States Magistrate Judge John Y. Powers in Chattanooga, Tennessee. Thereafter he returned to Knoxville and began his association with Arnett, Draper & Hagood.

Kim is admitted to practice in all Tennessee state courts, the U.S. District Court for the Eastern District of Tennessee, and the U.S. Court of Appeals, Sixth Circuit. He has tried numerous cases in both state and federal courts. Kim obtained his certification as a Civil Mediator in 2002 from the Tennessee Supreme Court Commission on Alternative Dispute Resolution, and has maintained that certification since that time. He is also a certified mediator for the U.S. District Court, Eastern District of Tennessee.

Kim has been an active member of the Knoxville Bar Association, serving on various committees and projects including chairing its Functions committee, Community Law School committee, Continuing Legal Education committee, its Alternative Dispute Resolution Section, and has served on the KBA Board of Governors. He is currently chair of the Archives Committee.

He served the Tennessee Board of Professional Responsibility as a hearing panel member, and currently serves on the Standing Committee for Admissions to the United States District Court for the Eastern District of Tennessee.

Kim was also a charter member of the Knoxville chapter of the American Inns of Court, and currently is a Master of the Bench Emeritis member of that organization. Kim is a member of the American Board of Trial Advocates, is AV rated by Martindale Hubbell, and is listed in Best Lawyers. He has also served as a seminar presenter to both professional and community groups on issues involving tort liability, workers’ compensation, trial procedure, and advocacy.

Kim and his wife have three daughters and six grandchildren. They enjoy family activities and quiet time in the mountains.